Spoiler alert! Larisa Latynina won the record for most medals almost 50 years ago. So how did she feel when Michael Phelps beat that record today? 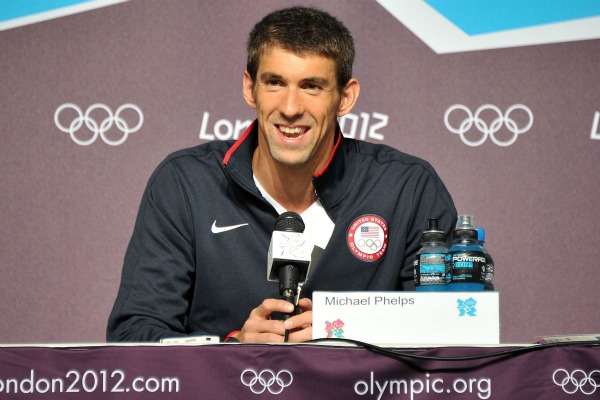 Many Americans have never heard the name Larisa Latynina, but you can be sure Olympian Michael Phelps has.

Until today, Latynina held the record for 18 Olympic medals. She stacked up those medals from 1956 to 1964 in gymnastics for the former Soviet Union.

“She was the first superstar in gymnastics at a time when womanly grace prevailed over teenage acrobatics,” said the New York Times.

Latynina is now 77 years old and was in the audience for Phelps’ record-breaking race Tuesday in London.

“[Phelps] was trying to beat everyone in the pool and Latynina’s record as well,” said the New York Times. “And when the moment came, she knew exactly what a great champion should do. She put on her lipstick.”

Tuesday night, Phelps won a silver medal in the 200-meter butterfly, tying Latynina’s record. He then won gold in the 4×200 freestyle relay, surpassing that record.

“Latynina joked in recent weeks that it was time for a man to be able to do what a woman had done long ago,” said the New York Times. “And that it was too bad Phelps was not Russian.”

The former Olympian spoke with the newspaper on Tuesday and said it was time to pass the torch.

“48 years is almost enough time to hold a record,” Latynina said in the interview.

She also said that she had hoped she could congratulate Phelps after the race but “Olympic rules did not allow it.” She did meet him earlier this year in New York though.

The New York Times said that when Latynina won the record, she received very little fanfare due to a combination of Soviet struggles and the infancy of TV.

“She kind of got lost in history,” said Paul Ziert, the publisher of International Gymnast magazine. “When the Soviet Union broke up, we had forgotten about her.”

Latynina doesn’t seem to mind too much though. She knows she will hold the record on another accomplishment for a while.

“Among women, I’m sure I will stay No. 1 for a long time,” she told the New York Times.