Mark your calendars. This fall, an all-star cast led by Robert De Niro and Diane Keaton will appear in The Big Wedding. It’s a comedy that centers on a dysfunctional family forced to grin and bear it for the bride and groom. 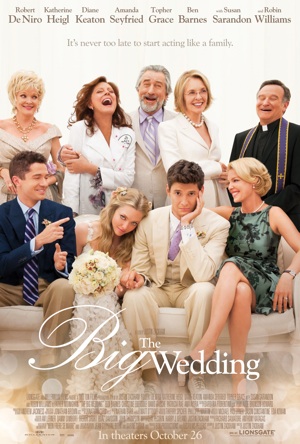 Nobody’s family is perfect. But some are worse than others. Take the Griffins for example. They’re the stars of the new ensemble comedy, The Big Wedding.

Lionsgate has released the first trailer for the film where everyone’s living a lie.

5 Movies for the romantically challenged >>

To the amusement of their adult children and friends, long divorced couple Don and Ellie Griffin (De Niro and Keaton) are once again forced to play the happy couple for the sake of their adopted son’s wedding after his ultra-conservative biological mother unexpectedly decides to fly halfway across the world to attend. With all of the wedding guests looking on, the Griffins are hilariously forced to confront their past, present and future — and hopefully avoid killing each other in the process.

The movie was written and directed by Justin Zackham. It follows in the footsteps of dysfunctional family films like The Family Stone, Meet the Parents and Nothing Like the Holidays.

Watch the trailer for The Big Wedding below:

What do think of the first trailer for The Big Wedding?