If the success of its current gold single, “(Kissed You) Good Night” is any indication, Gloriana’s sophomore album, A Thousand Miles Left Behind, will no doubt soar. 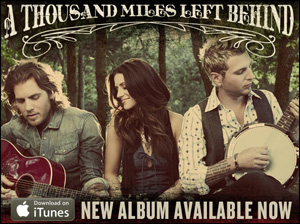 Originally scheduled for release last fall, Gloriana’s A Thousand Miles Left Behind contains tracks all co-written by members of the trio, brothers Tom and Mike Gossin and Rachel Reinert. The follow-up to 2010’s self-titled album “Gloriana” has been called an honest and very personal journey by the band’s members.

Personal growth came quickly on the heels of the sudden departure last year of bandmate Cheyenne Kimball, who abruptly announced that she was leaving via Twitter. After the initial shock, the trio regrouped and carried their dedication to country music and each other forward.

Their positive spirit and excitement can be felt in the upbeat tempo in the album’s opening track, “Gold Rush.” “Doin’ it Our Way” and “Wanna Take you Home” reflect the excitement and drive experienced in the performance spotlight.

Gossin and Reinert trade vocal leads in the hit “(Kissed You) Good Night” in the style of Lady Antebellum. “Such a sweet song,” cooed Bachelorette Emily Maynard when the song was incorporated into one of the show’s episodes. It was meant to be more than sweet, says co-writer Tom Gossin. “The song is ultimately about not ending up with regrets,” he explains.

“Turn My World Around” showcases Reinert’s smooth vocal range. “Sunset Lovin’” and “Carolina Rose” demonstrate art imitating life. The latter was written about the strain of success on Tom Gossin’s relationship with fiancée Jaime Moffett. The couple plan to marry in October of next year.

The group falters with lackluster “Soldier Song,” which appears like the perfunctory military tune in every country album released in the past decade.

The album starts strong and ends on a softer note. “Where My Heart Belongs,” reminiscent of Miranda Lambert’s “The House That Built Me,” reflects cherished childhood memories.

A Thousand Miles Left Behind is available now in stores and online.