Cuba Gooding Jr. is a wanted man in New Orleans after police are called to a local bar. A female bartender claims the famous actor shoved her against a wall as he fled the establishment. 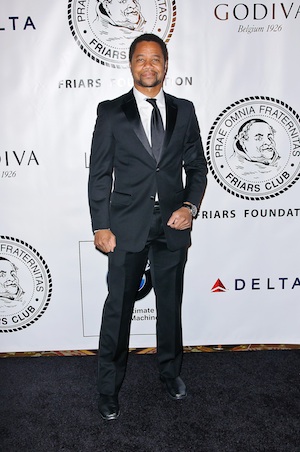 Uh oh: Cuba Gooding Jr. has a warrant out for his arrest. Cuba was in New Orleans, Louisiana filming the movie The Butler when a cocktail waitress at a local bar told police he physically assaulted her early Tuesday morning.

TMZ first reported the story and say their sources confirm Cuba Gooding Jr. does have a warrant out for his arrest. Apparently Gooding was extremely volatile on Monday night — shouting profanities at other bar patrons and just generally causing a scene after some fans asked to take pictures with the Academy Award-winning celebrity. The female bartender went over to Cuba and politely asked him to calm down and which point she claims he shoved her against a wall. The bar called 911 but Cuba Gooding Jr. left before police arrived at the scene.

The 44-year-old Gooding is currently married to Sara Kapfer; the two married in 1994. The pair were high school sweethearts in Los Angeles, California after Cuba Gooding Jr. moved to Los Angeles from New York City. The last few years have been professionally tough on Cuba Gooding Jr. — since 2008 nearly all of his movies except one made-for-television film were direct-to-dvd releases. The last major movie Cuba appeared was American Gangster back in 2007.

TMZ spoke with the New Orleans Police Department who say they are under orders to arrest Cuba Gooding Jr. if they see him around the city. Cuba Gooding Jr. did not return a request for a statement.