Kendall and Kylie Jenner may be mini-Kardashians, but these teens leave their diva birthright at the door in this interview with Seventeen magazine. 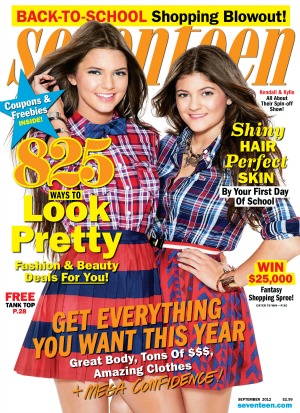 “If I could trade places with any of my sisters for a day, it would be Kim. I want to see what it’s like,” Kendall revealed. “The only time she sleeps is on the airplane. It’s just crazy. I feel bad for her, but I still want to know what it’s like.”

Do they love or loathe each other?

“Kim and Kourtney were constantly fighting when they were our age, and then they reached a point where they flipped and loved each other and they were best friends,” Kendall said. “Now, Kylie is my best friend — we have so much fun… I feel like she brings out the best in me.”

What’s the deal with Cody Simpson?

“Cody and I are just good friends. That’s it,” Kylie insists. “But we can say that as much as we want and people are still going to gossip.”

On their overprotective dad

“[Now that I can drive], my dad [Bruce Jenner] goes crazy. He automatically thinks I’m sneaking out if I leave the house without telling him,” Kendall said. “He calls me and asks where I am and I’m like, ‘I’m getting food! What do you think I’m doing in the middle of the day?'”

What would their spinoff be about?

“It would be about the adventures we go on,” Kendall explained. “We go on lots of adventures. We do crazy stuff! We will kidnap one of our friends or get a group together and go to Disneyland for the night. We do what we want to do. We’re just like, ‘Let’s make it happen! That sounds so fun!'”

For more on Kendall and Kylie, go to Seventeen.com and pick up the September issue of Seventeen, on newsstands Aug. 7th.