World Wrestling Entertainment’s expanded three-hour format for its flagship show, Raw, is off to a less-than-stellar start, thanks to a stage fire and a star pulling a “Daniel Tosh” during the live broadcast. 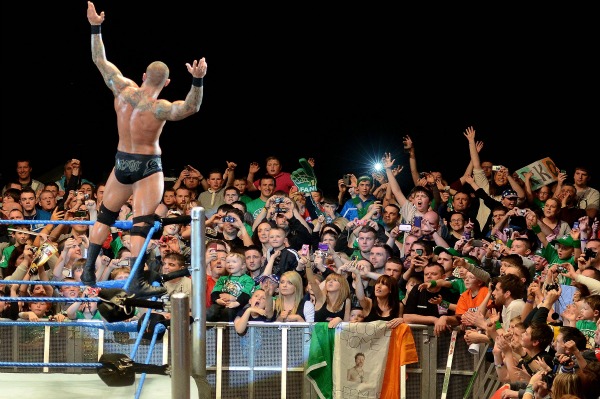 Like Daniel Tosh before him, WWE personality Abraham Washington made a crack about rape before some 12 million viewers Monday night — only after the company averted another disaster when its stage nearly went up in flames prior to its Raw show.

“Titus O’Neil is like Kobe Bryant at a hotel in Colorado — he’s unstoppable!” A.W. bellowed into the mike, while providing ringside commentary about a match featuring wrestler O’Neil.

Of course, A.W. was referencing the basketball star’s Colorado rape case from 2003.

WWE announcers were quick to apologize for the comment on-air, following the commercial break.

But the wrestling company also issued this statement: “”A.W. made an inappropriate comment and WWE immediately apologized. WWE has taken appropriate action in the matter.”

As of Tuesday morning, even wrestling insider blogs aren’t speculating as to what WWE meant by “appropriate action.”

No doubt right after the inflammatory statement was made, many wrestling-watchers speculated A.W. would either get canned — or suspended.

A.W. himself tweeted an apology, calling his comments “inappropriate and insensitive.”

“I went too far with that joke,” he wrote.

Sources close to the wrestling manager told TMZ he felt “horrible” about the comment, and simply “got caught up in the moment.”

Aside from inflammatory statements, the WWE stage nearly went up in flames.

WWE reports the blaze broke out shortly before doors were to open for the show at U.S. Bank Arena in Cincinnati.

Fans had to then rush to find their seats after the fire was under control, because the company opened doors to the arena an hour later than scheduled.

PW Insider is reporting that WWE is being “extremely tight-lipped” about the blaze.

They say it either broke out after the pyrotechnics discharged accidentally or that the pyro was too positioned too close to side panels, which caught fire during testing.