It’s hard to imagine The Newsroom’s resident brainiac, Olivia Munn, ever getting uncomfortable in public situations. She’s posed for Maxim and Playboy, for Pete’s sake! But the actress is coming out to the world about her battle with anxiety. 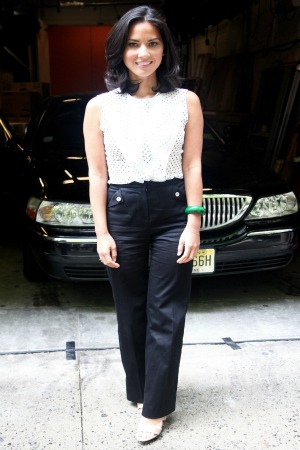 When Olivia Munn gets anxious, she doesn’t chew her nails; “I rip out my eyelashes,” the actress told New York Daily News.

This behavior has a name — “trichotillomania.”

The Mayo Clinic reports this condition can be “accompanied by considerable distress.”

The urge to pull out hair — not only eyelashes like Munn, but eyebrows, scalp and other parts of the body — can be so irresistible that entire areas of the scalp or eyebrows may be hairless from all the pulling.

“It doesn’t hurt, but it’s really annoying,” Munn told the Daily News. “Every time I run out of the house, I have to stop and pick up a whole set of fake eyelashes.”

The 32-year-old also took us back to her childhood as an Air Force brat.

“I don’t think anyone would describe me as weak, but I don’t want people to be mean to me,” she recalled. “I moved around a lot when I was younger and no one was nice to the new kid, so there is always this feeling that someone will make fun of me.”

The Newsroom star’s childhood appears to be far from a happy one.

“I had a very abusive stepfather, so there was a lot of bad sh-t in my family,” she told entertainment pub Vulture. “I found a picture of myself the day [my mom remarried]. Everybody else is all dressed up and smiling, and I’m just staring into the camera. It’s like I knew, This is not going to be good.

“I learned to have a good appearance on the outside, and then deep down inside just live with it,” Munn continues. “That experience made me very resilient. So right now there’s nobody holding me down, and I want to do everything I can.”