MTV announced its 2012 Video Music Award nominees Tuesday morning. The news is setting off a movement on Twitter, as Lady Gaga’s famously passionate fans rally around: #VMAs Are Nothing Without Gaga. 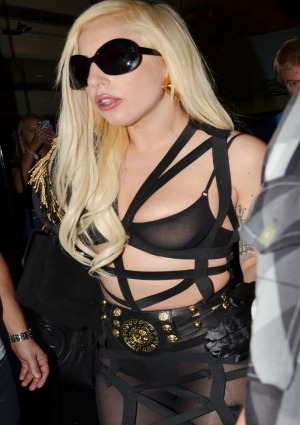 A year after Lady Gaga (and male alter ego Jo Calderone) led the 2011 MTV Video Music Awards to its biggest audience ever, Gaga didn’t even make this year’s list of nominees.

And it wasn’t for lack of material; Tuesday morning numerous outlets reported both her “Marry the Night” and ““Yoü and I” videos were eligible for a nod.

Gaga’s perceived snub inspired fans on Twitter to rally around “VMA’s Are Nothing Without Gaga,” which was trending Tuesday morning — shortly after the nomination list was released.

“No Lady Gaga, no Britney Spears, and no TALENT. The VMAs will be dying on their feet this year,” read another tweet.

Yet another “VMA’s Are Nothing …” follower wrote: “Can’t wait for Kanye West to get up on stage while someone is accepting a VMA award and says ‘THE VMA’S ARE NOTHING WITHOUT GAGA.”

Gaga herself has been absent on Twitter as well, with the Mother Monster’s last tweet, posted on July 27, being a somber one: “My godfather died yesterday, sweet man I love him.”

The tweet was accompanied by a photo of her godfather holding a baby Gaga.

And this year’s winners are

So, while Gaga came up a loser for the VMA nods this year, Rihanna and Drake were both the undeniable “winners.”

Each picked up five VMA noms.

MTV is also reporting Katy Perry nabbed four nominations, including for Video of the Year with “Wide Awake.”

A full list of this year’s VMA nominees can be found here.

The VMA awards will be broadcast live September 6.