Queen Elizabeth II’s granddaughter becomes only the second royal to compete in the Olympics. 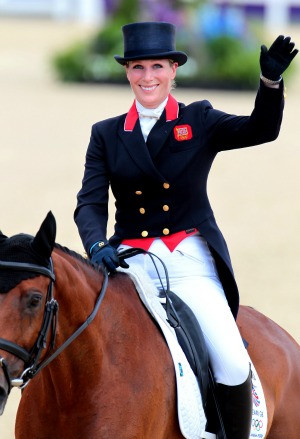 Of all the Olympians competing in the London Games, the royal family may be most excited about one of their own.

Zara Phillips, the cousin of Princes William and Harry, joined her Olympic team as an Equestrian competitor.

“The royal granddaughter of the queen (a princess in all but name, since her mother Princess Anne famously eschewed the title for her kids) had the full support of her family while competing in the cross-country equestrian event today,” said People.

Phillips may also have had one of the most prestigious audiences of the entire Olympics, as many of her family were in attendance.

“Along with Will and Kate, Prince Harry, Princesses Beatrice and Eugenie, and Camilla, Duchess of Cornwall and of course her mama Princess Anne were on hand to root on the royal as she made her way through the 3.5-mile, 28-obstacle course,” said People.

Sunday, Phillips competed in the dressage portion of the Equestrian competition.

“To be here at home is an amazing feeling, and you just want to try and do your best for the team,” Phillips told the Washington Post.

Phillips finished the course Monday at 9 minutes, 55.11 seconds, said the Washington Post. The time limit for the course is 10 minutes, 3 seconds. Phillips’ horse lost his shoe, making the time even more impressive.

“He did amazing,” she told the Washington Post. “He really grew up and stepped up to the plate.”

Phillips is not the first royal to compete in the Olympics. In fact, both her parents are past Olympians. According to People, her mother Princess Anne competed in the 1976 games, and her father, Captain Mark Phillips, won the gold in 1972 and the silver in 1988.

“After the dressage portion Sunday,” said the Washington Post, “Germany was in the lead with 119.0 penalty points followed by Australia with 122.1 and Britain with 127.”