Andy Samberg has made us laugh for years on Saturday Night Live, but now the actor is headed to the big screen full-time. See what he told us about his latest role in Celeste and Jesse Forever. 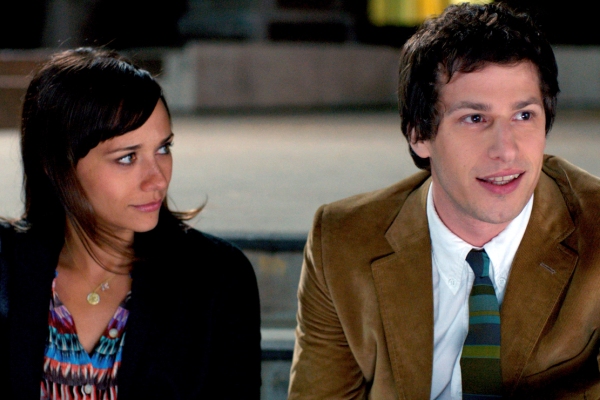 Andy Samberg steps out of his comfort zone with a mostly serious role in this month’s romantic drama Celeste and Jesse Forever.

“It was fun,” Andy told us.  “It was different. It was challenging. I know where my bread is buttered, and it’s comedy, but this is definitely the kind of more serious part that I felt like I was up for.”

Samberg does a fantastic job of portraying jilted husband “Jesse,” to Rashida Jones’ independent “Celeste.” However, the tables quickly turn in this brutally honest look at love.

While the movie has its funny moments – Jesse starts off as a pathetic stoner living in Celeste’s guest house — the story is quite serious. Andy flexes his acting chops as he successfully navigates the role of romantic lead, charming a gorgeous model and reducing Rashida’s character to tears. But don’t let Andy’s mature performance fool you; Samberg is just as silly as ever.

When questioned on his plans for the future, post Saturday Night Live, the actor informed us of some pretty lofty goals.

“I want to be President of the United States,” said Samberg. “I make no apologies for that. Yeah I’ve done some ‘shrooms, but if ‘W’ can do coke and be in the Oval Office, why not this guy?”

In all seriousness though, Andy isn’t pursuing the presidency. As for whether he’s done “shrooms,” Andy told us, “I may or may have not. I’m not going to confirm or deny that.”

Now that’s the Samberg we know and love!