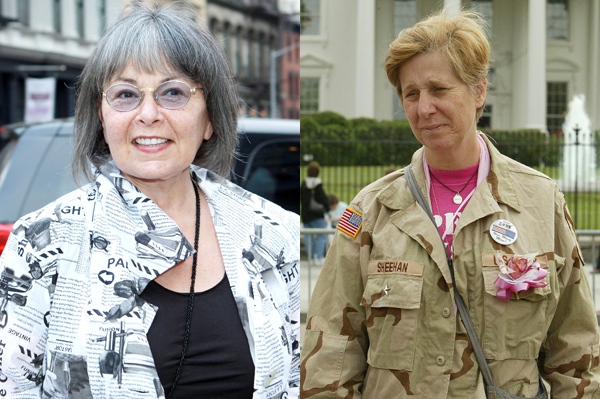 Roseanne Barr’s first pick for vice president — Willie Nelson — never responded to her repeated pleas for his help, so she finally had to move onto someone else. And that someone else? Political activist Cindy Sheehan.

Sheehan is best known for camping out at former President George W. Bush’s Crawford, Texas property after her son was killed in Iraq. She later unsuccessfully ran for Congress, but the political bug hasn’t left her body.

Barr — the candidate of the Peace and Freedom Party — couldn’t be happier with her pick.

“Cindy and I are the ‘Throw the Bums Out’ ticket and the ‘Ballot Access’ ticket. We want people to register in the Peace and Freedom Party so that the party can keep its ballot status in California,” she said in a statement, posted on Sheehan’s website.

They even have some backing of former politicians.

“Access to the ballot is a civil rights issue that needs attention across the country. If voters only have two choices, both of which represent the same interests, then we don’t really have a democracy,” former Georgia Congresswoman Cynthia McKinney said. “When I was in Congress, I promoted proportional representation for legislatures. This is the only way to make our democracy representative of the people, rather than the corporate donors.”

The pair will be at the Peace and Freedom Party nominating convention on Aug. 4 in Los Angeles — the same day Barr films her Comedy Central roast. Does Barr think they have a chance with the platform of legalized marijuana student loan forgiveness?

“The American people are sick and tired of this ‘lesser evil’ garbage they get fed every election year. Both the Democrats and the Republicans do the same evils once they’re in office,” Barr said. “I’m here to tell the voters: if you want to tell the government and the two domineering parties that you’re sick and tired of all their evil, register in the Peace and Freedom Party and vote for me and Cindy.”