A new day, a new “Twitter controversy” emerging from Olympic Village. Lolo Jones is the latest athlete to come under fire for a comment she made little more than a week after the Colorado shootings. 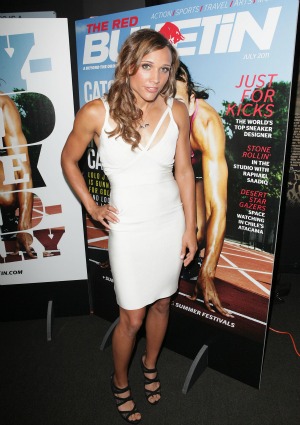 Like that banned Greek triple jumper and American soccer standout Hope Solo before her, Lolo Jones is learning the hard way to “think before you tweet.”

While the tweet may not have been a full-blown Solo-style rant, it did generate online criticism from users who still had the recent rampage in Colorado on the brain.

One tweep wrote: “Yikes, you’re probably gonna get some not-so-nice responses to that last tweet…”

Another hoped she was referring to an alternate type of “gun”: “Please say that’s a clever way of asking about weightlifting. PLEASE.”

There were enough of these types of comments that Lolo explained herself by tweeting: “sorry u guys only think of violence but I think of all the hunting I do w southerners in da south. Its impressive.”

Lolo can’t win when it comes to Twitter responses, because no doubt PETA isn’t all too happy with her explanation.

Regardless, as of Monday morning, Lolo seemed to have a number of supporters in her corner, claiming the tweet was “much ado about nothing.”

“Me being from the south I saw nothing wrong with Lolo Jones tweet. I don’t automatically think of violence when I think of guns,” one user wrote.

Another was more sarcastic: “Oh no, an Olympic athlete praised guns in the context of competitive shooting sports: She’s evil!”

“So lolo Jones is getting back lash for tweeting about guns and america??? reallllllly??? Society is so Sensitive man, u cant say anything,” reads another tweet.

On a related note, American markswoman Kim Rhode did take home the gold this weekend.