Fresh out of a two-year retirement, Olympic legend Michael Phelps just lost his first race back to fellow world-class swimmer Ryan Lochte. But which aquatic hottie-with-the-body do you think should get the gold for making the sport look so good? 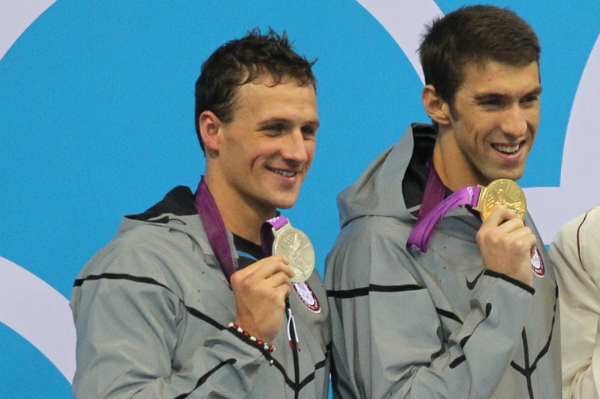 Ryan: A total free spirit, famous for stunts like showing up at the Golden Goggle Awards in an all-white leisure suit and posing on the podium in a blinged-out grill
Michael: A solitary kind of guy with intense focus

Ryan: Fast food — prior to a recent diet change, he was basically on the Super Size Me meal plan of McDonald’s thrice daily.
Michael: Party favors (refer to Troubled Waters section)

Where to stalk, er, find him online

Coupled up or clear for canoodling?

Ryan: Looks like it! His on-again/off-again girlfriend of four years, Jaimee Hollier, broke up with him via the phone last year… during an episode of his short-lived reality show, What Would Ryan Lochte Do?
Michael: Swimming solo at the moment, although linked to many lovely ladies in the past

Ryan: Kids! He’s the spokesperson for The Mac Foundation, as well as Parents Project Muscular Dystrophy, and he often gives mementos to young fans in the stands.
Michael: Swimming, duh! He founded the Michael Phelps Foundation and the Michael Phelps Swim School, in addition to co-founding Swim with the Stars, to promote healthy living and the sport of swimming.

Ryan: A Doberman named Carter (supposedly after Dwayne Michael Carter Jr., AKA Lil Wayne) and, according to the TeamUSA website, has three other dogs named Tike, Zeus and Spidy
Michael: Herman the English bulldog and Stella the Catahoula-mix rescue dog (his wing-woman)

Ryan: Around age 5, but he mainly horsed around in the pool — often getting kicked out for hijinks like pulling other kids’ legs (literally) — until his junior year of high school
Michael: Around age 7, as an outlet for his energy (he was later diagnosed with ADHD)

Ryan: His powerful kick, for propelling him impressive lengths
Michael: His pterodactyl-like 6’7″ arm span or his size 14 feet (infer what you will here, ladies)

Ryan: Tore a muscle in his knee while breakdancing at a party and subsequently had to be sidelined from swim training for seven months in 2009, and busted his knee again in 2013 when an overzealous fan jumped into his arms and caused them both to topple over
Michael: Busted in 2004 for a DUI and again in 2009 when photographed using a bong, leading to a three-month competitive swimming suspension

Ryan: The proverbial torch. With Phelps back out of retirement, Lochte has to maintain an edge if he wants to take the title of world’s best swimmer.
Michael: Legacy. He’s currently the most decorated Olympian of all time, but he’s going to have to stay vigilant to hold onto that record.

And the gold goes to…

Ryan Lochte! He may not be as decorated as Phelps, but we’re giving the edge to Lochte. Any man who can make lugging around tractor tires and posing on the cover of Vogue look equally hot wins top billing in our books any day. What do you think?