Justin Bieber has a history of immature actions. Since he is a teenager, it’s hard not to shrug it off as simply growing pains. However, on a recent flight his behavior was so bad that fellow became passengers extremely annoyed with the young pop star. 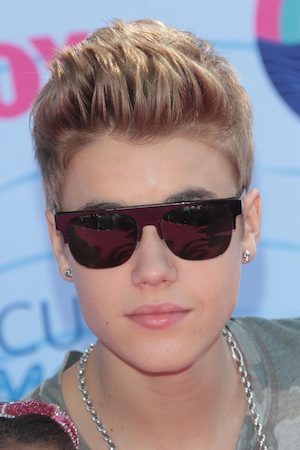 Justin Bieber trashed up first class and annoyed several passengers on a recent Air New Zealand flight. TMZ reports Bieber hopped a 12-hour return flight from Australia with several members of his entourage. The group became loud and disrespectful as Justin Bieber and his friends continued to “blurt out cuss words — including some 4-letter selections.” TMZ says Bieber and his group was so obnoxious that a mother with her two kids was forced to ask Justin to “stop yelling curse words” and explained to the pop singer “that kind of language [was] inappropriate.” A source told TMZ Justin Bieber was embarrassed and apologized.

Justin Bieber has a history of unpopular behavior. In May of 2011 when Justin Bieber appeared on CSI, co-star Marg Helgenberger commented that Bieber was immature. “He had never acted before. I shouldn’t be saying this, but he’s kind of a brat. He was actually very nice to me, but he locked one of the producers in the closet. And he put his fist through a cake that was on the table.”

Fox News reported back in August 2011 Justin Bieber had a run-in with flight attendants on a flight from Los Angeles to Asia. Eyewitnesses told Fox News Bieber — 17 years old at the time — refused to sit down when asked politely by flight attendants as the plane taxied to the runway. “He gave the staff a really hard time the whole flight, nobody could believe it,” the source said. “And then at the end, the Captain introduced himself to Justin and kindly asked for an autograph and he rudely refused.”

Do you think Justin Bieber is Hollywood’s newest bad boy?