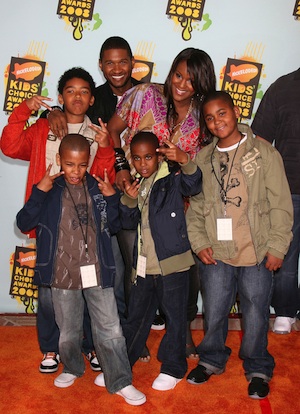 Usher’s stepson Kile Glover’s funeral service was held Friday in Atlanta, Georgia. MTV News reports Kile Glover — the 11-year-old son of Usher’s ex-wife Tameka Foster — was quietly laid to rest while family and friends did their best to make sense of the horrific tragedy. On the afternoon of July 6, 2012 Kile Glover and his family enjoyed a fun day at Lake Lanier just outside Atlanta when he was struck by a Jet Ski operated by a family friend as he floated on an inner tube. The Los Angeles Times reported Kile was unresponsive when pulled from the water. Glover was flown to Children’s Healthcare of Atlanta with a severe head injury and later declared brain dead.

Kile Glover’s funeral took place at the Wieuca Road Baptist Church. MTV New reports Usher’s family and several Atlanta-based celebrities were in attendance such as Ludacris, Jazze Pha and Phaedra Parks. In a statement to CNN, Kile’s family expressed their grief and faith. “We know God’s in control, and are leaning on our faith in Him and His word at this most difficult time.” They continued, “We firmly believe in the power of prayer and ask that you all continue to pray and lift Kile up, as it’s the best way we can all support him now.”

The death of Usher’s stepson caused his attitude to change as he proceeded with his divorce settlement to Tameka Foster. Usher spent days by Tameka’s side while Kile was in the hospital. A source told Us Weekly Usher and Kile were close. “Tameka and Usher don’t get along, but in this circumstance Usher [came] to her side.” TMZ reported in the days that followed the accident Usher offered to increase his child-support payments and give her primary custody of their two children. Previously Usher sought joint custody.