Chick-fil-A’s public relations leader has died suddenly, in the midst of the restaurant chain’s escalating drama over president Dan Cathy’s anti-gay marriage stance. Was it a heart attack? 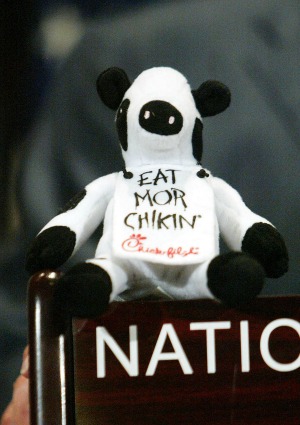 The Chick-fil-A team is in mourning today over the unexpected death of PR leader Don Perry on Friday morning. Early reports state it is believed Perry, tasked with handling backlash and boycotts due to the company’s anti-gay marriage stance, suffered a heart attack.

“Don was a member of our Chick-fil-A family for nearly 29 years,” the company said in a statement Friday. “For many of you in the media, he was the spokesperson for Chick-fil-A. He was a well-respected and well-liked media executive in the Atlanta and University of Georgia communities, and we will all miss him.

“Our thoughts and prayers are with his family,” Chick-fil-A’s statement concluded.

Earlier this month company president Dan Cathy told an online publication that he supports “the biblical definition of the family unit… We intend to stay the course. We know that it might not be popular with everyone, but thank the Lord, we live in a country where we can share our values and operate on biblical principles.”

Unpopular, indeed. Actor Ed Helms tweeted his distaste for Chick-fil-A’s stance, adding that he would no longer be eating at their establishments, while The Jim Henson Company has pulled The Muppets toys from their fast food kids meals.

In a statement issued by Don Perry on July 19, he attempted to remove Chick-fil-A from politics, saying, “Going forward, our intent is to leave the policy debate over same-sex marriage to the government and political arena.”

Though the company’s officials need time to cope with Don Perry’s passing, the Chick-fil-A gay controversy shows no signs of quieting down. On Aug. 1 supporters of Chick-fil-A have planned an “Appreciation Day,” while opponents are gathering for a “Kiss-in” just two days later.