Justin Bieber was reportedly chewed out by a mom for his potty mouth during a first-class flight to Australia. At the risk of facing the wrath of his hardcore Beliebers, the “Boyfriend” hit-maker doesn’t have a good track record with neighbors in general — be it those sharing a plane or a ‘hood with him. Just ask actors Kristen Bell and Dax Shepard… 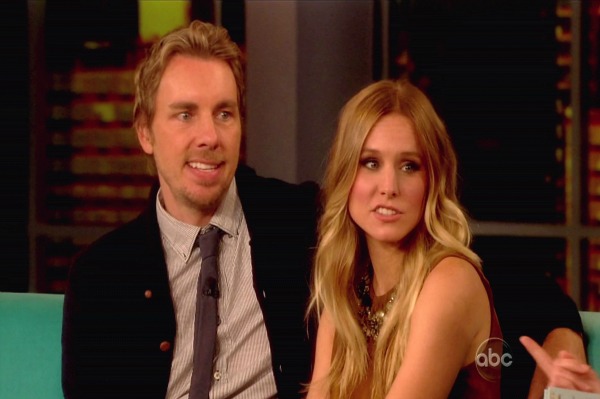 Kristen Bell and fiancé Dax Shepard can probably relate to the mother-of-two who ripped out the Biebs for his f-bomb-laced tirade during a long-haul trip to Oz.

During a promotional tour for their new flick, Hit & Run, the couple told the ladies of The View that all was well in L.A. — until Bieber fever virtually landed on their doorstep.

Biebs apparently rents a spread behind the star pair’s home.

“There’s not necessarily like a love-hate feud [between us],” Bell said, adding, “Well, a little bit of hate.”

That “hate” stems from the pop prince acting like, well, an irresponsible 18-year-old who happens to have a lot of money.

“The music and the parties and the paparazzi, I mean, it’s like living in Lebanon now,” Shepard said.

The Veronica Mars actress also pointed out that living in close proximity to Biebs has aggravated the “paparazzi thing.”

Her guy explained: “They’ll be bored waiting for Bieber to wake up and we come outside.”

The comic went on to make an admission that he had love for the Biebs pre-noise pollution.

Bearing in mind that Shepard is a comic (he’s got to be kidding, right?), he went on share with the world: “A friend of ours made the Bieber documentary, so we went to support (director) Jon Chu. So didn’t I fall in love with Justin Bieber during that documentary?! I had cried and laughed 90 times during the first five minutes, I left with complete Bieber Fever.”

While the Biebs insists he’s “a man now” who is a “lot more mature” and “more grown up,” actions indicate otherwise.