Almost 30 years after the original movie was released, a Broadway musical based on the film is opening this holiday season. 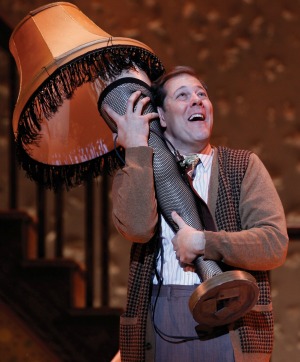 This holiday season, TBS will have some competition.

A Christmas Story, the movie that is regularly played for 24 hours on the cable network, will be coming to Broadway for the 2012 holiday season.

“Christmas Story, The Musical! will arrive on Broadway at The Lunt-Fontanne Theatre just in time for the 2012 holiday season,” said Scott Klein, a rep for the musical.

In 2011, the musical launched a tour but will find a home this year in New York.

“The story from a cherished movie classic that’s enchanted millions is now a musical spectacular,” said Klein. “In 1940’s Indiana, a bespectacled boy named Ralphie has a big imagination and one wish for Christmas — a Red Ryder BB Gun. A kooky leg lamp, outrageous pink bunny pajamas, a cranky department store Santa and a triple-dog-dare to lick a freezing flagpole are just a few of the obstacles that stand between Ralphie and his Christmas dream.”

The musical’s cast has yet to be announced. According to Klein, the musical will be directed by Tony Award-winner John Rando. Rando formerly worked with Urinetown. The musical was choreographed by Warren Carlyle, who formerly worked on Chaplin, Follies and An Evening with Hugh Jackman.

The music was written by Benj Pasek and Justin Paul, and the songs seem to fit the movie well, with titles like “Red Ryder Carbine Action BB Gun” and “A Major Award.” According to the Sacramento Bee, this will be the Broadway debut for both.

The musical is even co-produced by Peter Billingsley, who played Ralphie himself in the 1983 film. The actor is now 41 years old and has been acting on-and-off since the 1983 film, including some small parts in holiday films, including Elf and Four Christmases.