Roseanne Barr is about to get a dose of her own medicine: The comedy veteran is set to get her own Comedy Central roast. Check out how she’s preparing! 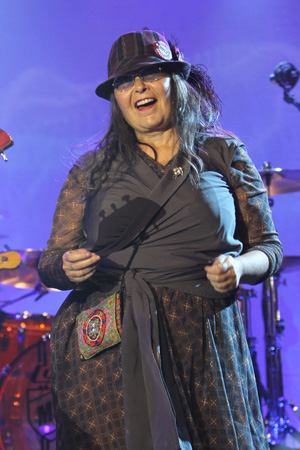 Roseanne Barr is about ready to get a dose of her own medicine: The outspoken comedian is getting roasted on Comedy Central on Aug. 12 with Glee star Jane Lynch as Roastmaster.

“Although Roseanne appears to be a demure, soft spoken woman eternally committed to the status quo, we believe under the surface is an explosive, trail-blazing cultural revolution. We are honored to roast her,” Comedy Central said in a press release.

“Celebrating Roseanne’s unprecedented achievements in comedy and television will surely inspire us to make this roast more reminiscent of the classic roasts, where the intimacy of friends jousting with each other came through.”

Comedy Central is already promoting the roast — Barr’s the first woman to get roasted in over two years — with a promo that has her conducting a choir on the Star Spangled Banner. If you remember, she caught a lot of flack in the early 90s for “singing” the National Anthem before a baseball game — and it turned into one of her most infamous moments.

“All I can say is good luck finding anything about me to make fun of,” the presidential hopeful joked. “I mean, I’ve never made a mistake or offended anyone in my life.”

We can’t wait to see what Lynch and the other roasters have to say about Barr — especially since her latest scandal involving Chick-fil-A. The former Roseanne star ignited a firestorm of controversy earlier this week when she said that “anyone who eats S*** Fil-A deserves to get the cancer that is sure to come from eating antibiotic filled tortured chickens 4Christ.”

“I shouldn’t have used the word deserved in my tweet and I apologize… what I meant was not that ppl deserve cancer-at all. I meant to warm ppl not 2 eat processed food,” Barr tweeted.

Sure you did, Roseanne. Can’t wait to see what she says during the Roast!

Watch the promo for Comedy Central’s Roast of Roseanne