The book was released in May and names some famous actresses that were in Monroe’s life. 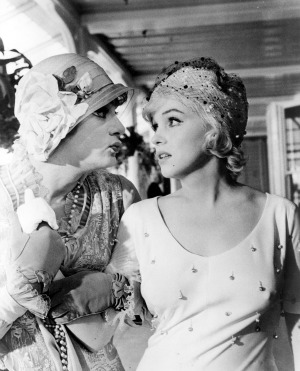 Marilyn Monroe has been the object of men’s affection for over 60 years, but a new book is suggesting she may not have only been interested in men.

“The 1950’s blonde bombshell not only allegedly admitted to encounters with movie stars such as Joan Crawford, Barbara Stanwyck, Marlene Dietrich and Elizabeth Taylor, she also seduced a 16-year-old girl who ran her fan club,” said RadarOnline.

The new book, Marilyn Monroe: My Little Secret by Tony Jerris, also talked with a woman who was 12 years old when she met Monroe, and ended up running her fan club.

The actress was 29 years old at the time, and the then-teen, Jane Lawrence, spoke about her friendship with Monroe.

“Jane met Marilyn when she was 12 because her adopted father ran the legal department at RKO studio,” said RadarOnline. “They soon became close friends after realizing that they had been in the same orphanage at different times of their lives, even though Marilyn was 14 years older, and neither of them knew their birth fathers. They became close friends because there were so many similarities in their past.”

In the book, Lawrence talks about her friendship with the actress and how she became one of her closest friends and confidant. She also spoke about how Monroe helped her realize she was gay.

“Jane always struggled with her sexuality, she talked to Marilyn about this many times and she was very understanding,” said RadarOnline of the book. “She told her, ‘Whatever your sexual preference is, it means nothing — love is love.'”

However, Lawrence doesn’t believe that Monroe was gay. “She was just a free spirit,” she said. “She was a very open person.”

Lawrence stayed friends with Monroe up until her death at the age of 36, and always blames herself for not trying harder to save her.

The book was released over two months ago, and until the author’s interview with RadarOnline, has not made any waves. It seems like either no one noticed its release, or don’t believe Lawrence’s claims.