Alexa Vega looks very grown up as her new role in Robert Rodriguez’s upcoming film Machete Kills. The actress tweeted a sexy picture of herself that quickly set Twitter ablaze and impressed fans. 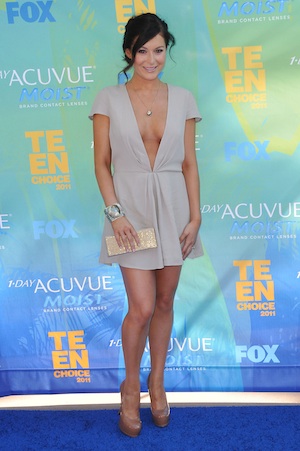 Alexa Vega is set to star in Robert Rodriguez’s new film Machete Kills, and took to Twitter to stir up some promotional buzz. Vega made headlines today after she tweeted a very sexy picture of herself in tons of makeup and showing lots of, um, cleavage. You can check out all of her pictures on her Instagram account. The 23-year-old actress is best known for her role in Spy Kids, a family film from 2001. I suppose Alexa Vega’s awkward years are officially behind her.

Robert Rodriguez is infamous for creating films that mix sultry actresses with violent action. Machete Kills looks to be no exception as IMDB cites the movie as “the U.S. government recruits Machete to battle his way through Mexico in order to take down an arms dealer who looks to launch a weapon into space.” The film also stars Sofia Vergara, Mel Gibson, Charlie Sheen, Jessica Alba, and Michelle Rodriguez. Vega will play a character named “Killjoy.”

Run for the hills! Charlie Sheen cast as president >>

Curious enough, Robert Rodriguez walked Vega down the aisle in her 2010 wedding to Sean Covel. Covel is best known for his role as a producer on Napoleon Dynamite. And now Alexa and Sean are headed for divorce. TMZ obtained paperwork filed in Los Angeles Superior Court a few weeks ago. Vega cites her official separation date from Covel as of March 5, 2012 and claimed “irreconcilable differences” as the cause for divorce.

41 mins ago
by Caroline Greelish