Regis Philbin spoke out about the recent Penn State sanctions and removal of Joe Paterno’s statue outside Beaver Stadium. 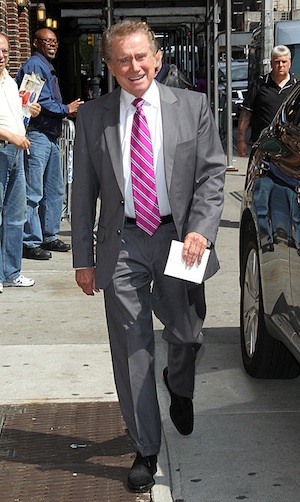 Regis Philbin talked to TMZ yesterday and when asked about the recent Penn State sanctions, Philbin admitted he thought the whole thing was an overreaction from the NCAA. Philbin also seemed to think the controversy over the statue — which was taken down last week — was misguided. We transcribed a copy of the videotaped conversation:

TMZ: “And I want to ask you about the Penn State sanctions, whether you think they are fair or excessive?”

Philbin: “I think the Penn State sanctions were overdone, really excessive in so many ways. Hurt a lot of people who had nothing to do with this whole thing. And so, in that that way, some of them were justified, but they—”

TMZ: “If you were in charge of the program, what would you have done?”

Philbin: “What would I have done if I was coaching the team, you mean?”

TMZ: “Yeah, if you had the authority to make these decisions on the sanctions, what would you do? How would you punish the team and the players?”

Philbin: “I would take the money — 60 million — and uh, cancel a couple of ball games, but not to the extent that they did.”

TMZ: “Do you think they have a right to take down Paterno’s statue?”

Philbin: “It broke my heart to see that. I don’t know, to tell you the truth.”

Controversy surrounded Paterno when it was revealed Paterno knew of the molestation after receiving complaints from assistant coach Mike McQueary in 2002. In 1998 Sandusky remained employed but was the subject of a formal police investigation after a mother reported her son was molested by Sandusky. He retired in 1999 but was granted access to Penn State’s football facilities to use for his charity, The Second Mile.

The statue of Joe Paterno outside the entrance to Penn State’s football stadium stood for over a decade. The board of directors at Penn State made the controversial decision to remove the statue last week, and it was taken down on Sunday.

The NCAA announced its sanctions decision earlier this week. According to ESPN, “Penn State faces a $60 million fine, a four-year football postseason ban and a vacation of all wins dating back to 1998.”

Regis Philbin is known for his dedication to his alma mater Notre Dame and his love of football.