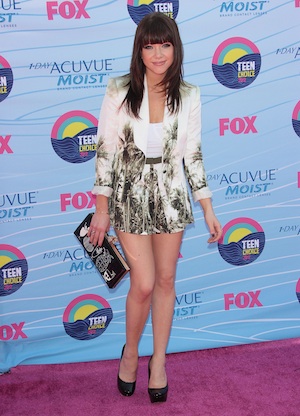 “Call Me, Maybe” singer Carly Rae Jepsen is naked in new photos according to a police report first reported by TMZ. A police report filed in Vancouver, Canada states Jepsen believes a hacker stole the scandalous photos from her computer and is now trying to sell them. This comes just a few weeks after Carly Rae Jepsen successfully denied nude pictures floating around the web were of her. TMZ reports the naked pictures thought to be of Jepsen were actually of Destiny Benedict who bears a striking resemblance to the “Call Me, Maybe” singer.

In addition to Jepsen’s fear of her actual naked photos finding their way into public light, she also faces a sex tape scandal. Carly Rae tweeted Wednesday morning: “Crazy morning. Discovered that someone put up a sex tape claiming to be me. Ridiculous. Obviously not me.” True, it can be so annoying when people think you have a sex tape just because you have naked pictures of yourself.

So, now back to the Jepsen naked photos — the police report filed actually came from an anonymous tip to law enforcement way back in March 2012. TMZ reports after Vancouver authorities followed through on the information they did in fact conclude Carly Rae Jepsen’s computer was hacked. TMZ obtained a statement from Vancouver Police Department who confirmed the investigation and say the situation is regarding as “stolen electronic property”. Outside sources claim there is already a suspect in mind.

No word yet from Carly Rae Jepsen on her actual naked photos.