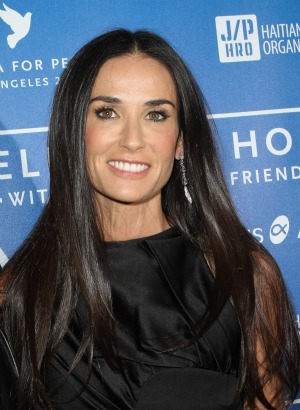 It seems like just yesterday that Demi Moore was reportedly heartbroken over the new romance between her ex-husband Ashton Kutcher and his former co-star Mila Kunis.

(Oh wait, it was yesterday.)

It looks like Moore has already moved on though. According to the New York Daily News, the 49-year-old actress has been out with a much younger actor, 37-year-old Martin Henderson.

However, Kutcher is even younger than Moore’s new boyfriend, by three years.

Life & Style Magazine took some photos of the two last weekend in Connecticut.

“They were very comfortable with each other,” The NY Daily News said a witness told the magazine.

Another source added, “She was in line and a Colbie Caillat song came on — she started singing along and dancing in a playful, flirty way.”

But it was only earlier this week that a source told RadarOnline that Moore was devastated over the photos of Kutcher and Kunis that had been taken over the weekend.

“Demi is devastated that Ashton has moved on so quickly and is dating Mila,” said the website. “She is beyond heartbroken. Even though Ashton cheated on her all the time, it was with random girls, it wasn’t a relationship like it is with Mila and that is what is killing Demi now.”

It seems like the new relationship may have been Moore’s sign that it is time to move on.

“She kind of knew it was definitely over between them but I think she was still holding out a little hope for a reconciliation — now he’s actually dating someone else she knows that’s not going to happen,” said the friend.

The New York Daily News reports that Moore and Henderson enjoyed a lobster dinner during their trip, followed by a day of hiking at Steep Rock Preserve and a barbecue dinner.

“They just kept chatting and laughing,” said a witness of the couple.