Jon Hamm has been seen out in the last few weeks with different women, even though he has a girlfriend at home. Are the meetings innocent, or does Hamm have some explaining to do? 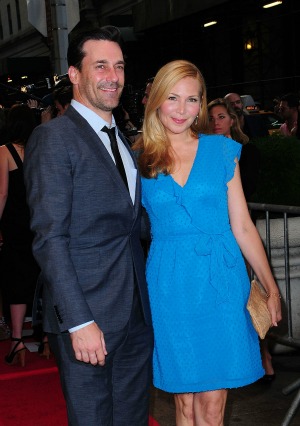 Jon Hamm has been in a committed relationship with actress Jennifer Westfeldt for 15 years, but lately he hasn’t been acting like it.

According to The Daily, the Mad Men actor has been all over the world in the last few weeks, chatting up hot ladies.

“Hamm first raised eyebrows while visiting Kansas City, Missouri for baseball’s All-Star Game,” said The Daily. “Flying solo at a Yahoo-sponsored VIP party at CrossroadsKC at Grinders on July 8, he chatted up a hot blonde wearing a sheer shirt — a dead ringer for his absent girlfriend.”

Later in the week he was in Rome and had his arm on the waist of Italian actress Anna Safroncik. A photo was taken of the two at the July 13 show of OCTO The New Architecture of Time by Bulgari.

The Daily said that the next week he was again at it. He was seen out in Brooklyn, New York, this time with another blonde.

“He didn’t even really want to go out, but I convinced him,” The Daily said the woman was overheard saying at the bar. She said that Hamm “was surprised nobody was coming up to him!”

Hamm eventually started talking to women around him.

“Accompanied by fellow actor pals Jon Glaser and Eugene Mirman, Hamm hit on the female bargoers, according to Twitter user @crashnabula,” said The Daily. “’They had no game either,’ he tweeted the next day. ‘They just bought drinks for every mediocre girl they approached, and the girls dipped after 10 min of convo.’”

It’s possible Hamm may just be a friendly guy. But he may learn that the public cares about his personal life, and will pay attention when he talks to other girls.

But as for Hamm and Westfeldt’s relationship, they are not talking about any problems yet. And until they do, we should probably assume that Hamm’s late night exploits are completely innocent.