There’s less of Matthew McConaughey to love these days, as the typically buff star is seriously slimming down for his next role. Despite looking scary skinny already, he’s got even more pounds to shed! 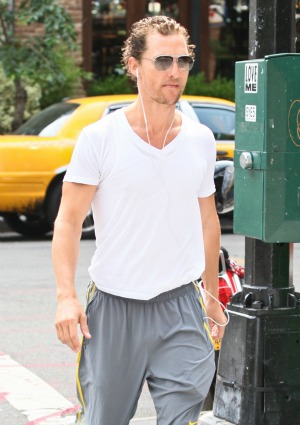 Matthew McConaughey skinny? It’s not often an association we make with the actor. Slim, trim, buff and gorgeous sure — but that’s all changing as the star sheds pounds for his upcoming role in The Dallas Buyer’s Club.

As Matthew McConaughey’s wife, Camila Alves, grows and glows while pregnant with their third child, the actor is sweating and dieting down to record lows in order to play electrician Ron Woodroof, who was told to “go home and die” after developing full-blown AIDS in 1986.

Sharing a bit about his latest character, the Magic Mike stripping star said recently, “In the late 80s in Dallas he was a heterosexual guy, an electrician, and he got HIV through doing some… some time he spent with some ladies and doing some drugs.”

As for Matthew McConaughey’s weight loss thus far? The man pictured here after running in New York on July 23 shared, “I’ve lost about 16 pounds; I need to lose another 15. It’s for work… I’ve got something coming up in the middle of September… I should not look healthy by the time I’m doing (filming) this.”

Asked how he’s going about losing a staggering 30 pounds from his already trim frame he said during an interview with Larry King’s new Ora.tv web series, “It’s a bit of a spiritual cleanse, mental cleanse. Drinking a lot of tea. It takes a while for your body to understand that it has to feed off of itself and that you’re not going to give it something else from the outside.”

Slimming down while your wife’s got every excuse to indulge in cravings? You’re a man of steel and one heck of serious actor, Matthew McConaughey!