On May 21, 2003 American Idol enjoyed a viewership of 38 million people. On May 22, 2012 American Idol had a viewership of 15 million. Even those of us with compromised math skills can see that ain’t good. Cue the chirping crickets. So how did this American family staple stumble in such a spectacular way? Here are a few of our theories… 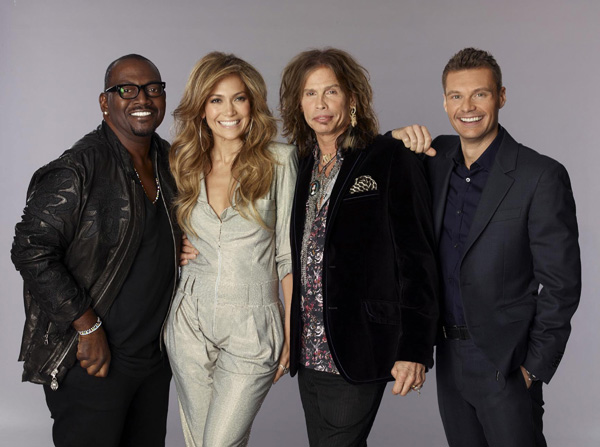 Simon was mean, nasty, hurtful and arrogant. That’s why we loved him! Well, some of us did. Some of us would just as soon see him spontaneously combust as judge budding talent. Whether you loved him or loved to hate him, he was fascinating to watch. Simon was a loose cannon. He was either sending people crying off the stage or giving someone a heartfelt shot at stardom. His absence from the show left a tremendous void in the drama department. Less drama = crap ratings.

We could sugar-coat this and say we are going to miss JLo, but that’s a waste of time. Even those who didn’t tune into the show often (a segment of the population that grew exponentially over time) started to see American Idol for what it was — a marketing vehicle for Jenny from the Block. While many of us may not be shedding a tear over Jenny’s departure, you could almost hear an audible groan from the public when yesterday’s headlines announced that Mariah Carey was JLo’s replacement. Awesome. Carey is an undeniable chart buster, but her music isn’t for everyone. Her analysis of contestants may be hard to take for some members of the lingering American Idol audience who don’t care for MC’s glass splintering voice and sugary sweet lyrics. Perhaps we shouldn’t be so quick to judge. She is married to Nick Cannon, host of America’s Got Talent. Nick is friendly, funny and hip. Maybe Mariah will showcase a Mrs. Cannon side to her personality we haven’t seen yet.

Who doesn’t love Steven Tyler (not including the 4000 women he allegedly slept with)? He’s had a respectable career, a diverse and loyal audience and he was a decent judge. But sometimes it looked like someone needed to “just push play” when it came Steven’s turn to judge. Most of Steven’s critiques went a little like this — he’d say, “Oh man, that was really beautiful,” and gesture in JLo’s direction before practically nodding off.

American families first got their noses out of joint when a scantily clad Lady Gaga gyrated her lady parts against an equally scantily and muscle-clad male dancer. Once the dust settled on that uproar, JLo kicked it up a notch and featured her soft-porn video “Dance Again” with her 20-something boyfriend Casper Smart. Know your audience, people. When Ma and Pa America are making homemade pizza and cozying up to American Idol with their kiddies, they don’t want to view something that reminds them of the entertainment at their boys’ prospective bachelor parties.

Uh, it’s called American Idol, not JLo/Aerosmith/Dawg Idol. The reasons Americans fell in love with this program is because they felt like they had a say in who America’s next big superstar would be. Implementing the “save” by judges sort of took the American out of American Idol and made it feel like the judges knew better than the audience. And maybe they did. But that is not the format that made this show great. The format that viewers fell in love with was listening to the judges’ feedback and then voicing their opinions through their votes. The “save” may have made some viewers feel like their votes didn’t matter, so ultimately they may have stopped voting. And watching. Just a theory…