NBC is giving you a chance to see new fall shows before they officially premiere! Read on to find out the details. 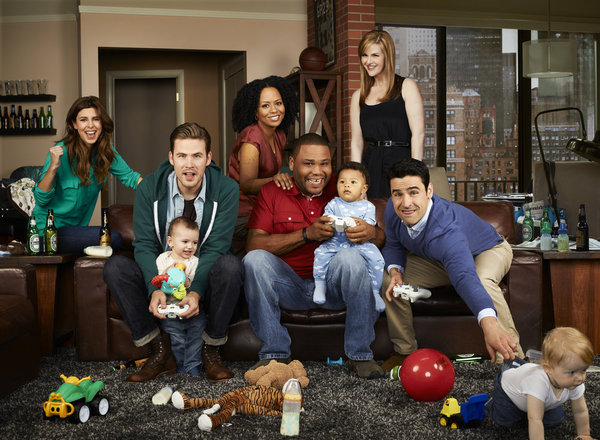 Tired of summer reruns yet? So are we. Luckily, we’ll have plenty of good television to watch when the 2012 Olympics hits NBC in just a few short days. If that’s not enough, NBC is also offering an extended preview of its upcoming fall show Revolution on Aug. 4, along with commercial-free, full-episode previews of its new fall comedies Go On on Aug. 8 and Animal Practice on Aug. 12.

Commercial-free TV on a broadcast network? Sign us up.

The shows — along with three other new fall shows — will then make their official debut in September. Not sure what these shows are all about? Let us help.

Anthony Anderson, Jamie-Lynn Sigler and Sara Rue star in this guy-centric comedy about three thirtysomething dads trying to navigate parenting. It sounds like it’ll be funny — Jimmy Fallon is a producer, after all.

The Real Housewives of Atlanta star NeNe Leakes ventures over to acting in this comedy about a woman who becomes a surrogate for a gay couple. It also co-stars Hangover star Justin Bartha and Ellen Barkin.

“I think the show in many ways is about tolerance and a discussion of tolerance,” creator Ryan Murphy said. “I think their points of view are delivered with sensitivity and a certain amount of voracity by Ms. Barkin. I think if they watched it, they would like it.”

Friends star Matthew Perry makes his way back to the network that made him famous for this comedy about a sportscaster that goes to group therapy after a loss.

“We’re not writing a show about grief, we’re writing a show about people moving on and getting better,” writer Scott Silveri said. “People are going through all kinds of change in the group — from the loss of a spouse, to a lady whose cat died. They find some commonality together. It’s not so much exploring that grief as it is coming together and moving on. The worst thing that could happen to [Perry’s character] happens, and he picks himself back up and puts himself back together and, in so doing, becomes a better person.”

Iron Man director Jon Favreau directed the pilot episode of this post-apocalyptic drama by J.J. Abrams about a world with no technology. The Twilight Saga’s Billy Burke stars.

The Hangover 2 star Crystal the Monkey stars as Dr. Zaius Rizzo in this comedy about a human vet who loves animals, but hates their owners. The cast said they love working with Crystal, even though she’s the clear star of the show.

“Actually, I love the monkey, but I put it in my contract not to be in any scenes with her because she is a scene-stealer,” actress Kym Whitley joked. “As the character, I love all the animals. Juanita loves animals. She helps run the hospital. But Dr. Rizzo is a mess just like the rest of them.”

Taylor Kinney and Jesse Spencer star in the drama about a Chicago fire company. The show — from Law & Order creator Dick Wolf — features Chicago mayor Rahm Emanuel in the pilot.

“I called him up and he said, ‘I don’t know, is that good for the city?’ ” Wolf said during the TCAs this week in Los Angeles. “I said, ‘Well, every mayor since [New York’s David] Dinkins has been on the Law & Orders and it sure hasn’t hurt New York.”