Actor Jason Alexander is horrified by The Dark Knight Rises massacre — and he’s even more horrified by a society whose permissive gun laws allowed it to happen. Read on to find out what he had to say. 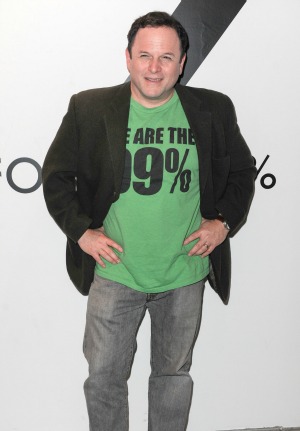 Jason Alexander is taking a controversial stance on an extremely timely hot-button issue: That stricter gun control laws could have prevented the massacre at The Dark Knight Rises screening in Aurora, Colorado.

The Seinfeld actor used Twitter as his platform to espouse his views, and became extremely defensive when pro-gun advocates started name calling.

“This morning, I made a comment about how I do not understand people who support public ownership of assault style weapons like the AR-15 used in the Colorado massacre,” he wrote.

“That comment, has of course, inspired a lot of feedback. There have been many tweets of agreement and sympathy but many, many more that have been challenging at the least, hostile and vitriolic at the worst.”

“Clearly, the angry, threatened and threatening, hostile comments are coming from gun owners and gun advocates,” Alexander continued. “Despite these massacres recurring and despite the 100,000 Americans that die every year due to domestic gun violence — these people see no value to even considering some kind of control as to what kinds of weapons are put in civilian hands.”

“I believe there are evil forces at play in our government,” he said. “But I call them corporatists. I call them absolutists. I call them the kind of ideologues from both sides, but mostly from the far right who swear allegiance to unelected officials that regardless of national need or global conditions, are never to levy a tax. That they are never to compromise or seek solutions with the other side. That are to obstruct every possible act of governance, even the ones they support or initiate. Whose political and social goal is to marginalize the other side, vilify and isolate them with the hope that they will surrender, go away or die out.”

The actor concluded by asking fans to hug their friends and family.

Tell us: Do you think stricter gun control could have prevented the Colorado tragedy?