Katie Holmes gave an interview to C Magazine the day before she filed for divorce, but did she let on more than they realized? 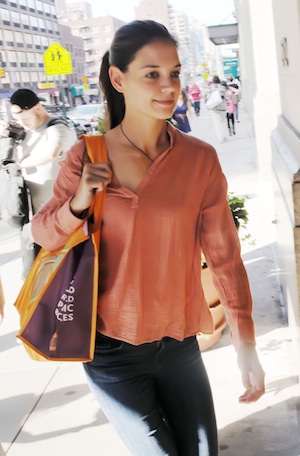 Katie Holmes was interviewed just the day before she filed for divorce, and now her statements are taking on a whole new meaning.

The interview took place with C Magazine, and to them it seemed like just another celebrity interview at the time.

“Going back over the tapes, there were signs: Holmes was certainly very aware of herself, laying a couple cards on the table but never showing her whole hand,” senior editor Kelsey McKinnon said, according to E! News. “Most noticeably, the one name decisively absent from her lexicon: Tom Cruise.”

Holmes also posed for the cover shoot a week before she had filed for divorce. And, according to the magazine, they did not see any signs of a woman who was about to leave her husband.

McKinnon didn’t realize it at the time, but “[Holmes] never actually refers to [Cruise] by name over pages and pages of transcription.”

One of the questions asked by McKinnon had to do with Holmes and Cruise’s daughter Suri. She asked the mother if having their child brought them closer together as a couple. Holmes’ answer, in hindsight, is very telling.

“I don’t know. I mean … I don’t know,” Holmes told the magazine, according to E! News. “People have been having babies a long time.”

Another interview Holmes did about six weeks before her divorce also seems to tell a lot about what she was thinking at the time, without giving anything away.

Cruise and Holmes have already reached a divorce settlement, most of which has not been disclosed. But Holmes had asked for sole custody of their daughter. Cruise has been seen out with Suri though. And when he is not with her, he has been video-chatting with the child.