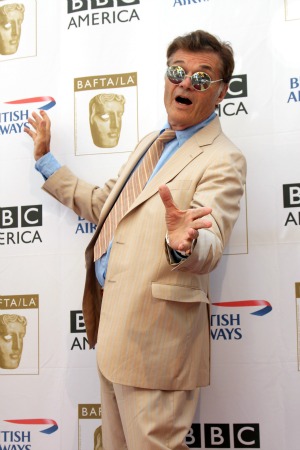 Instead of shying away from the incident that got him cuffed by undercover cops Wednesday, Fred Willard used his comedic chops and took a different approach: He tweeted about it!

“Wait til u hear my version; much more PG,” the 72-year-old wrote. “& my review, lousy film, but theater would make a terrific racquetball court.”

We don’t quite know what cinematic “gem” Willard was expecting here, given that the Tiki Theater was playing such soon-to-be classics as Step Dad 2 and a (presumably particularly naughty) parody of The Client List at the time of his arrest.

The counseling option would cost the 50-year veteran of big and small screens a paltry $380.

It’s obviously not about the moola — it’s the principle.

And Willard’s attorney has stated: “With all due respect to the individual officer, our belief is that Fred did nothing in any violation of any law.”

And, with all due respect to Fred, there is some “precedent” on the officer’s side.

The Los Angeles Times reports the actor known for his wacky roles was arrested previously for the same lewd conduct charge back in 1990.

Let me echo a suggestion offered by comedian and filmmaker Al Brooks: “For his birthday I’m getting him a den and a computer.”