In 2011, The Voice became one of NBC’s biggest hits. Last May it wrapped its second season, and this fall it will return for its third. That’s two-times The Voice in one year. Overkill much? NBC plans to use its pop star judges to keep things fresh. 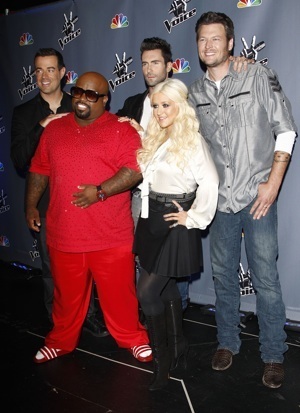 Talent competitions are taking over TV. Every major network seems to have their own, including NBC. They currently air The Voice and America’s Got Talent, with the former returning for its third season.

So is the network worried The Voice will wear out its welcome? NBC president Bob Greenblatt doesn’t think so.

“I will just say almost every reality franchise does two cycles a season. And one could argue that American Idol and The X Factor are the same show in many respects — one fall, one spring. So we’re obviously cautious about expanding it. We’ve also done some things to the format…”

Paul Telegdy, NBC’s president of Alternative and Late Night Programming also chimed in with his thoughts on The Voice‘s future.

“It’s a challenge for anyone producing one of these shows to keep it fresh and vibrant. We think we’ve come up with some great ways to do that. When you look back at the season, you look at the points where the show changes pace,” said Telegdy.

Christina Aguilera does the unthinkable: She apologizes >>

The network realizes most of the show’s viewership stems from the friction between the coaches. They each want their team, and their artist to win. So this season, The Voice will focus on that internal divide.

Cee Lo: Adam and Christina are ruining The Voice >>

“One of the exciting things about The Voice is obviously the famous red chairs and the button pushing. We’ve found exciting ways to keep the competition between the judges going through the last stages of the competition.”