The Jackson family just took their feud to a whole ‘nother level. Matriarch Katherine Jackson’s attorney issued a statement Tuesday morning, alleging that the King of Pop’s famous siblings have plotted for three years to separate MJ’s three children from their grandmother. 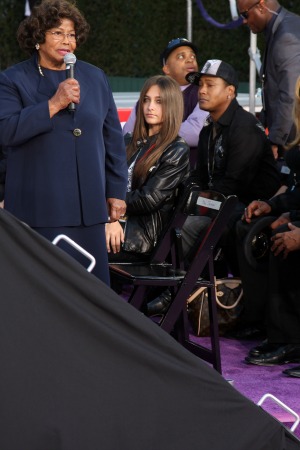 That alleged “plot” was put into action Monday, when attorneys for the late pop star’s 86-year-old mother issued a statement claiming that “certain Jackson family members ambushed Katherine Jackson’s home after their vehicle tore through security gates on the tails of the SUV containing Michael Jackson’s children.”

Things escalated from there.

Katherine’s legal camp alleges “family members” ran up to a hysterical Paris, Prince and Blanket and “began to aggressively grab at the cell phones in their hands.”

TMZ also posted footage, supposedly from security cameras, showing Janet Jackson swiping at Paris — in an attempt to get her cell phone.

Why did Janet (and Jermaine and Randy, reportedly) want the phones so much?

Well, Paris has been tweeting the Jackson family dramas rapid-fire in recent days, first claiming that Katherine had a heart attack and later claiming that her grandmother was “missing” and that she hadn’t seen her for days.

On Monday, Jermaine Jackson was the first to issue a statement, saying that his mother had been in Arizona with his sister, Rebbie, all along, under the advisement of her doctor who suggested she “destress.”

Within hours of that statement going viral, said “ambush” of the Jackson kids occurred.

Apparently, things got so out of hand that the children were forced to hide out in a safe location away from the home for a time.

Sheriff’s deputies also confirmed to The Los Angeles Times that a fight did occur at the Calabasas home, though no arrests were made.

What’s more, the legal team claims this ambush was part of an ongoing “plot” hatched by Michael’s siblings, stating: ““Following the incident, it was learned that one of the family members who was part of the ambush admitted that a plan has been in place for the last three years to remove Katherine Jackson from her home and her beloved grandchildren.”

TMZ is also reporting that the TJ, the 34-year-old son of Michael Jackson’s brother, Tito, is seeking guardianship of the three kids.

Sources “familiar with the situation” told the site that Katherine, the children’s current guardian, has “effectively been kidnapped” by MJ’s siblings. So they want TJ to step in.

It’s been widely reported that, prior to this blow-up, some of Jackson’s siblings banded together to challenge Michael’s will.

Not surprisingly, feathers appear to be ruffled as that will allegedly left everything to MJ’s kids, under Katherine’s care, and shut out the sibs.

Janet has also made it perfectly clear that she’s against 14-year-old Paris pursuing an acting career, claiming that went against Michael’s wishes for her to stay out of the limelight.

Another day, another drama in the Jackson family estate saga.