A movie doesn’t pull the trigger, right? People kill people. But The Dark Knight Rises, the Batman blockbuster that grossed more than $160 million in its opening weekend, surfaced in at least four arrests made in recent days. 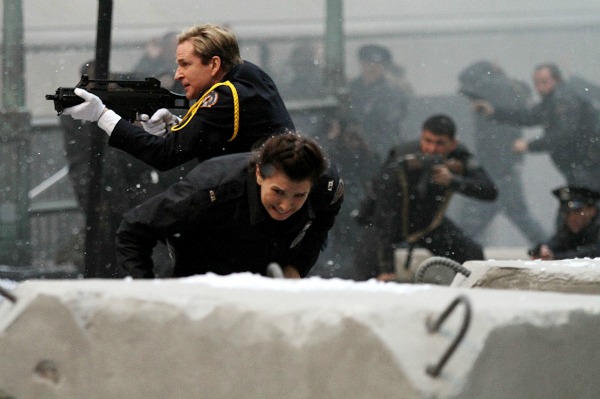 We hear a lot about “copycats” in the days following a tragedy the magnitude of the Colorado shooting, which claimed the lives of 12 people and injured dozens more during a midnight showing of The Dark Knight Rises.

And it seems there is reason to fear such “copycats” this time around. CBS News/Associated Press reports that at least four people were arrested since Sunday after threats were made during the movie. In at least one case, the arrest revolved around a Batman-inspired murder plot.

Timothy Courtois of Biddeford, Maine, told police he was on his way to shoot a former boss a day after watching The Dark Knight Rises, state officials said Monday.

Apparently, Courtois had been stopped for speeding, but police officers who searched his car were in for an unpleasant surprise.

The AP reports the police found an AK-47, four handguns, ammo, and news clippings about the Colorado shooting,

On Sunday, CBS/AP reports moviegoers fled the Waterfront complex in West Homestead, Pennsylvania, after a fight broke out between two women and a patron yelled, “Bomb!”

At least one person was in the hospital with a leg injury, after chaos ensued during a mad rush to the exits.

The Pittsburgh Post-Gazette quoted a moviegoer who indicated patrons were just jumpy after Friday’s horrific shootings at a mall theater.

“It would’ve just been a fight at The Waterfront, which I’m sure has happened before,” the moviegoer told the newspaper.

Across the country in Southern California, a 52-year-old man was arrested after witnesses told police the man shouted during a Sunday afternoon screening: “I should go off like in Colorado,” and asked, “Does anybody have a gun?”

In Sierra Vista, Arizona, enthusiasts of The Dark Knight Rises panicked when a 27-year-old man, who “appeared intoxicated” allegedly made threats and intimidated other moviegoers, sending at least 50 people out of the theater and causing what the Cochise County Sheriff’s Department called “mass hysteria.”

While these incidents may be chalked up to jittery moviegoers overreacting in light of Friday’s rampage, “copycats” are a very real possibility. No wonder AMC Theaters has stepped up its security measures, which includes not allowing patrons in costume in their cineplexes.