Robert Pattinson’s liquid diet turned out to be a brag-worthy experience in the TMI department. Four minutes? Way to go, whiz kid. 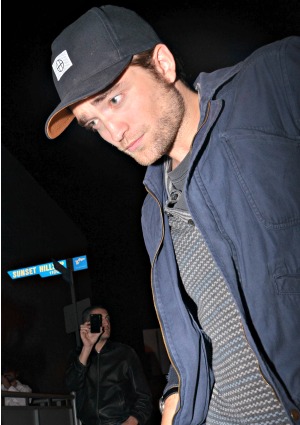 Robert Pattinson isn’t ashamed to share that a liquid diet recently put the “P” in Pattinson to epic proportions. The actor talked about his foray into dieting, as well as marrying that Kristen Stewart girl, during a recent chat with BlackBook magazine.

Robert Pattinson shirtless photos may be in high demand, but having to disrobe for the cameras puts added pressure on the Twilight star. Looking to slim down a bit before taking it off, the 26-year-old admits he’s been giving a liquid-only diet a go — only to experience some interesting side effects.

“I had to be shirtless for a photo shoot, so I asked a nutritionist what’s a diet in which you can still drink as much as you want,” Robert Pattinson explained to the magazine. “She said a liquid diet.”

Weight loss from the diet is apparently secondary in importance to the conversation, however, because this accomplishment is what the guy known as Edward Cullen chose to share: “I was so impressed with myself yesterday. I took a pee that was four minutes long.”

No word on if girlfriend Kristen Stewart is impressed by Robert Pattinson’s latest accomplishment, but we do know that if she’s been hoping to walk down the aisle with her on and off-screen beau she better be prepared to sit pretty for a while longer.

Robert Pattinson, a gossip magazine regular, shared, “There was a magazine, with these pictures, saying I was getting married. No one ever knows what is true or what isn’t. Even my own mum called to ask me if it was true. It’s not. At least, not yet.”