Another star has joined the Quarter Quell. Jena Malone has officially been cast as Johanna Mason in The Hunger Games: Catching Fire. She’s a past champion who’s got some serious skeletons in her closet. 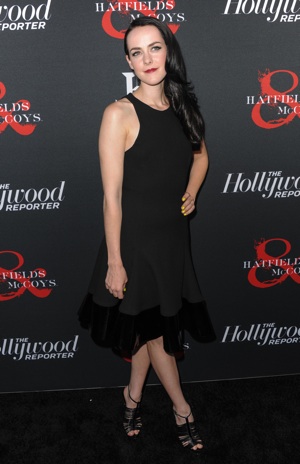 After weeks of rumors we finally have confirmation: Jena Malone is Johanna. The actress has officially joined the cast of The Hunger Games: Catching Firing alongside newcomers Philip Seymour Hoffman and Amanda Plummer.

Has Jena Malone been offered the Catching Fire role? >>

Lionsgate released a casting announcement describing Johanna as a past victor still in her early twenties. She’s one of the youngest, but also one of the most psychologically scarred Quarter Quell participants.

Malone has had a busy couple years. She starred in the Zack Snyder action-flick Sucker Punch, before landing a pivotal role in the History Channel’s Hatfields and McCoys. The latter broke cable records earlier this summer when it became the most-watched cable entertainment telecast of all time.

The Hunger Games: Catching Fire begins as Katniss Everdeen has returned home safe after winning the 74th Annual Hunger Games along with fellow tribute Peeta Mellark. Winning means that they must turn around and leave their family and close friends, embarking on a “Victor’s Tour” of the districts. Along the way Katniss senses that a rebellion is simmering, but the Capitol is still very much in control as President Snow prepares the 75th Annual Hunger Games (The Quarter Quell) — a competition that could change Panem forever.