Jenni “JWoww” Farley and bodybuilder boyfriend Roger Mathews are planning their own spinoff reality show after Jersey Shore ends. Find out what other buxom star she wants to emulate with the show. 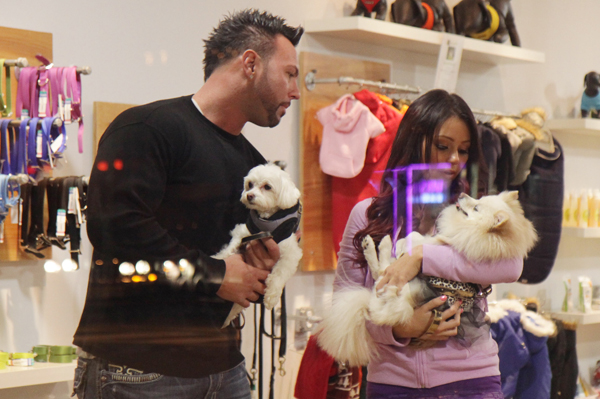 MTV reality star Jenni “JWoww” Farley has a post-Jersey Shore plan, and it doesn’t include fading into oblivion. The 26-year-old buxom brunette wants to start her own reality show with her hulk of a boyfriend, Roger Mathews.

“We’d be like The Newlyweds, like Nick [Lachey] and Jessica [Simpson],” Farley told The Daily’s Flash. “Psycho 1 and 2.”

Mathews is down with the idea — after all, he’s already had ample screen time on several season of Jersey Shore.

“We’ll get it worked out. He’s the only one I could do it with because I’m shy,” she added.

The couple is also thinking marriage, but Farley only wants to do it if her bodybuilder beau gets her a “big ring.”

“That’s all I care about — a big ring,” she told People. “[Roger’s] dad is dying for us to get married. He wants grandchildren. He texts me almost every day for that.”

The thing she doesn’t want, though? A career in acting. She might have had a bit part in The Three Stooges, but she doesn’t consider herself an actress.

“I did The Three Stooges [movie], which was probably the best experience in that industry that I could ever get,” JWoww told The Daily. “I hope one day I could do another film. I don’t consider myself an actress. I only know how to play myself, really!”

Not surprising, given that posing on the cover of Maxim was the reality star’s biggest “accomplishment.”

“I cried when I found out. I was jumping up and down and totally bugging out,” she said after the cover came out late last year. “This is probably my highest accomplishment.”

And here we thought our college degrees were a pretty big deal! Guess not.