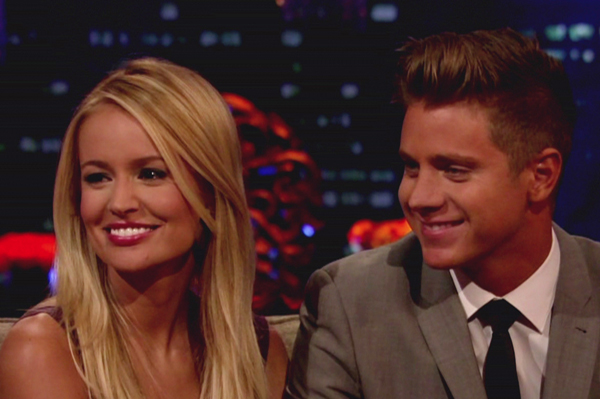 The Bachelorette starring Emily Maynard is over — and the 26-year-old blonde bombshell opted for skateboarder Jef Holm over racer Arie Luyendyk on Sunday night’s finale.

“I never in a million years thought I’d be so in love as I am,” Maynard said as she waited for the proposal in Curacao.

“You really are everything that I’ve looked for so long,” Holm told Maynard as he got on one knee. “I really do feel like you’re my soul mate. You are the perfect person for me. You get me better than anybody ever has. I love you so, so much.”

All together now: Awww.

The biggest star at the finale, though, was the incredible ring Hollywood jeweler Neil Lane provided for Holm’s proposal. The ring is a 3.5-carat sparkler with an incredible 87 accent diamonds around the band, according to People.

Luyendyk was blindsided by Maynard’s breakup before the final rose ceremony.

“Good luck. … Thanks for sparing me the embarrassment of tomorrow. I appreciate that,” he told Maynard during the show. He must not be too heartbroken about it — a SheKnows source flirted with the 30-year-old at a Scottsdale, Arizona bar a couple of Fridays ago.

But, back to the happy couple: Is it happily ever after? So far, so good.

“I found the perfect man,” Maynard said after the show. “He’s my best friend.”

The North Carolina hospital event planner said that Jef was the only man that met her five-year-old daughter, Ricki.

“There’s no question in my mind that Jef would be the best dad and the best husband,” Maynard gushed.

“I love her to death,” Holm countered.

Will they make it to the altar? Here’s hoping… stay tuned.