The world was watching James Holmes Monday morning, as the Colorado shooting suspect made his first court appearance with shaggy, red hair to match reports that he modeled Friday’s shooting spree after the “Joker” character portrayed by the late Heath Ledger in 2008’s Batman blockbuster. 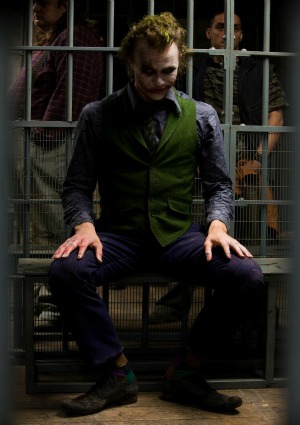 Aside from looking completely out of it during a brief hearing Monday, James Holmes’s only other prominent trait was his mop of orange- and red-hued hair.

This characteristic wouldn’t raise eyebrows, if not for reports that Holmes’s monstrous acts were inspired by the “Joker” villain late actor Heath Ledger brought to life in 2008’s The Dark Knight.

The 24-year-old Holmes is suspected of orchestrating a shooting rampage that killed 12 moviegoers and injured dozens more during a midnight screening of The Dark Knight Rises in Aurora, Colorado.

“It clearly looks like a deranged individual,” said New York Police Commissioner Ray Kelly at a press conference on Friday. “He had his hair painted red, he said he was the Joker, obviously the enemy of Batman.”

The murder spree may be particularly unsettling to Kim Ledger, the father of the late Aussie actor who put his own diabolical “stamp” on the legendary Batman villain.

“We can’t blame Heath or the character,” Kim Ledger told Australia’s Herald Sun. “It’s (The Joker) fictitious. I don’t know what this does to the character.”

Ledger added the character’s role in rampage is “the least of my worries.”

“I’d be more worried about the families and other people involved in the tragedy rather than anything else,” he said.

The Ledger family has certainly experienced their own personal tragedy; Heath passed away at age 28 from an accidental overdose in New York City.

His portrayal of the Joker in the second film in Christopher Nolan’s The Dark Knight trilogy earned a posthumous Oscar.

Holmes is expected to be formally charged with 12 counts of first-degree murder in a Colorado court next Monday.

Monday morning, Judge William B. Sylvester told the dazed Holmes that he may also face the death penalty for his alleged crimes.