While Michael Jackson’s mom may be “safe and well” with her daughter in Arizona (so says Jermaine Jackson), there’s no love to be found among many members of the Jackson family. 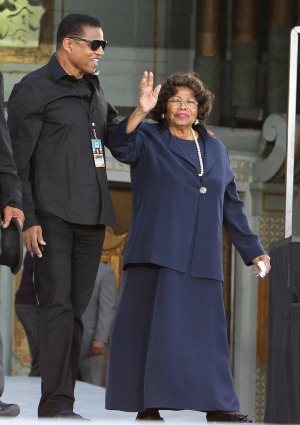 In fact, the King of Pop’s daughter, Paris Jackson, is leveling some pretty hefty charges against the family regarding her grandma’s welfare.

“The same doctor that testified on behalf of dr murray saying my father was a drug addict (a lie) is caring for my grandmother… just saying,” Paris tweeted Sunday.

That eyebrow-raising message came on the same day that Paris tweeted both a “security number” for anyone with knowledge of Katherine Jackson’s whereabouts to call, as well as “confirmation” that the 82-year-old matriarch is missing.

“i haven’t spoken with her in a week i want her home now,” Paris wrote.

Katherine’s 57-year-old son, Jermaine, vowed to issue a statement to end what he called “this wildfire of madness.”

The Jackson 5 member did just that on Monday morning, calling the reports that his mother was missing “nonsense.”

“Mother is safe and well in Arizona with her daughter and our sister, Rebbie, resting up on doctor’s advice, so it is beyond me how she can be reported ‘missing,'” Jermaine said in the statement.

While many media outlets are simply reporting an anonymous “family member” filed the missing person’s report on Saturday, TMZ reports that Katherine’s nephew was the one who went to police.

The next day, Paris was tweeting frequently about her grandmother — and made that public plea to hep locate her.

Jermaine made it clear that the missing person report was “alarmist” and “caused unnecessary anxiety among Michael’s children.”

Here’s looking at you, apparently, Paris.

He further said Michael’s kids, who also include brothers Prince and Blanket, will “understandably react to what they misunderstand, hear or are told.”

Addressing claims by family members, Jermaine wrote the following in a lengthy statement: “No one is being “blocked” from speaking with Mother. She is merely an 82-year-old woman following doctor’s orders to rest-up and de-stress, away from phones and computers. Everyone has been well aware of this within the family, but I would like to reiterate my reassurance to the outside world that Mother is fine. In the meantime, thank you for all your thoughts and concerns.”

CNN is reporting that an Arizona law officer backed up Jermaine’s statements. The officer also confirmed that Katherine wants to stay with her daughter, Rebbie.

This is the latest in a series of very recent family squabbles, which included Paris taking to Twitter (again) to squash rumors that her grandmom suffered a stroke.