When the actor signed on as a spokesman for a company, he had no idea how the city of Boston would take it. It looks like they’ve taken it pretty well.

Related story Sharknado 3: 12 Blatant inaccuracies you might have missed 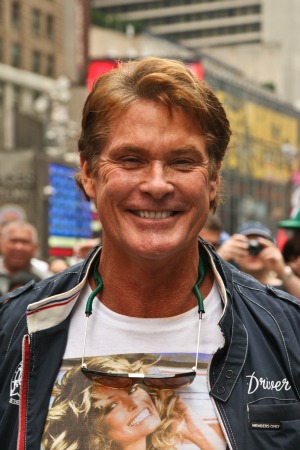 When David Hasselhoff signed on as the spokesperson for Cumberland Farms, Boston had no idea what they were in for.

The company produced cut-outs of the actor endorsing their $.99 coffee, but all but a few of the them have gone missing.

Hasselhoff told WHDH in Boston that it is “cool and kind of humbles me” that people would be stealing the cut-outs.

KSDK reports that Hasselhoff was contacted by the company, and at first thought he had done something wrong. 550 of the cut-outs have gone missing so far.

“The first thing I thought of was that I was in trouble and then I thought, ‘Oh good they’re not accusing me of stealing, they’re accusing people of stealing me,'” he said.

He misunderstood the story though when he first heard it, thinking it was a different kind of compliment.

“I looked at the report this morning that said ‘ripped Hoff’ and I thought, ‘Aw that’s nice, they’re saying I’m still in good shape,’ And then I realized people were stealing me,” Hasselhoff said.

But to be fair, that could be why people are stealing the cut-outs, since his cardboard likeness is dressed in a tight tank top holding the coffee.

Hasselhoff said he’s just flattered about the thefts, but was surprised by it.

“When I found out that they were stealing them I laughed really hard because I thought it was pretty funny,” he said. “It’s cool and it kind of humbles me that people are still following David Hasselhoff after all these years.”

The flattered actor is still the ultimate spokesman. When talking to WHDH he made sure to promote the product the cut-outs were originally meant to endorse.

“I just hope nobody gets in trouble but I encourage everybody to go out and see what they can do about stealing a Hoff but please have a cup of coffee while doing it,” Hasselhoff said.