Tom Cruise and his lawyer are bringing out the big guns to fight the stories the National Enquirer is publishing about the divorce, Cruise’s parenting and whether or not he really is Suri’s father. 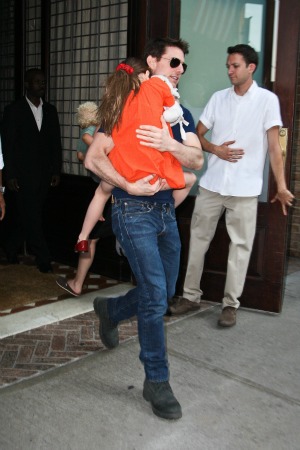 The Tom Cruise vs. National Enquirer battle seems to have just begun.

Last week, Cruise’s lawyer sent a letter to the National Enquirer’s publisher, American Media, according to the Hollywood Reporter.

“Tom Cruise’s lawyer is threatening to sue the National Enquirer over a cover story that claims the actor is a ‘monster’ who ‘abused’ wife Katie Holmes and subjected daughter Suri to a five-month stay in a ‘tiny, windowless room,’” said the website.

The letter from the lawyer claims that because of the story, the actor will lose “hundreds of millions of dollars of professional and personal damages, for which we intend to hold American Media, and everyone who participated in the perpetuation of this scurrilous attack, jointly and severally liable,” reports the Hollywood Reporter.

“Your cover announces, as a fact, that ‘THE REAL TOM CRUISE IS A MONSTER.’ Mr. Cruise is certainly not a ‘monster.’ He is a caring father, a hardworking actor and, above all, an honest, decent man.”

But now, Cruise is fighting another claim by the Enquirer. The paper is alleging that there may be questions as to Suri Cruise’s paternity.

“A source claims that he ‘will be most disturbed over suppositions that Suri will someday ask him to take a paternity test to prove he’s her father,’” said Entertainment Wise.

The new story is showing that the National Enquirer is not heeding the threat of Cruise’s lawyer, and is going to keep publishing storied about the actor.

No suit has been filed yet by Cruise’s lawyer, but they want to let the publication know they are serious. The letter also threatened to “call the Court’s attention to your long record of printing and publishing malicious lies about celebrities in order to enrich yourselves at their expense.”