Chick-fil-A is feeling the heat from customers unhappy about anti-gay marriage comments made by the chain’s president. From regular chicken-cravers to the rich and famous, including actor Ed Helms, fans are flocking far away. 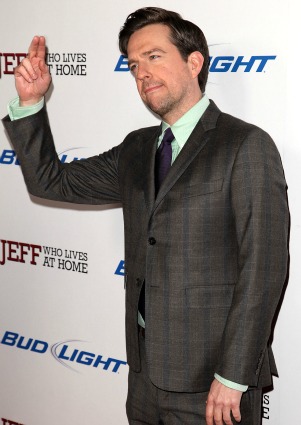 Chick-fil-A’s anti-gay marriage stance is turning out to be hard for some customers to stomach. The restaurant chain has been trending in the news for all the wrong reasons ever since president Dan Cathy said he’s “guilty as charged” when it comes to the eatery’s “support of the traditional family.”

What’s that mean, exactly? Well, for actor Ed Helms, a self described “loyal fan,” it means swearing off waffle potato fries in favor of other fast food eateries.

“We are very much supportive of the family — the biblical definition of the family unit,” Chick-fil-A president Dan Cathy told the Biblical Recorder. “We are a family-owned business, a family-led business, and we are married to our first wives. We give God thanks for that.

Which Hangover star is headed for another Vacation? >>

“We operate as a family business … our restaurants are typically led by families; some are single. We want to do anything we possibly can to strengthen families. We are very much committed to that,” the man in charge of 1,608 restaurants explained.

“We intend to stay the course,” he added of Chick-fil-A’s plans for the future. “We know that it might not be popular with everyone, but thank the Lord, we live in a country where we can share our values and operate on biblical principles.”

The interview, to put it in a cliche, left a bad taste in Ed Helms’ mouth. The actor who recently voiced The Lorax‘s Once-ler, tweeted in reaction, “Chick-fil-A doesn’t like gay people? So lame. Hate to think what they do to the gay chickens! Lost a loyal fan.”

Concurring with Ed Helms’ Chick-fil-A stance, one Twitter user wrote Friday, “Dear Chick-Fil-A: You sell fast food. You aren’t doling out loaves and fishes. Try not to be so pious about sexual orientation.”

But of course, as with any heated controversy, there are those who’d argue with the actor and defend the fast food chain’s position. “@edhelms so people aren’t allowed to have personal convictions?” questioned one follower. “They aren’t killing gay people, just don’t support gay marriage.”

Will you be boycotting Chick-fil-A along with Ed Helms?

27 mins ago
by Summer Cartwright