Sports blogger Jessica Redfield a victim of the the Colorado theater shooting already survived one shooting at a shopping center in Toronto earlier this summer. Read on for her sad story. 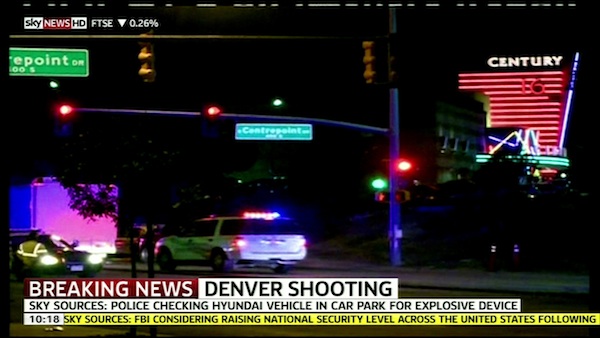 Aurora, Colorado police officials have not yet identified the victims of the horrific shooting during The Dark Knight Rises showing early Friday morning. We have learned that one of the victims is Jessica Ghawi, a sports blogger known as Jessica Redfield, who just moved to Denver from her home state of Texas.

What’s worst: Ghawi recently survived a June mass shooting at a mall at the Eaton Center in Toronto.

“I can’t get this odd feeling out of my chest. This empty, almost sickening feeling won’t go away. I noticed this feeling when I was in the Eaton Center in Toronto just seconds before someone opened fire in the food court. An odd feeling which led me to go outside and unknowingly out of harm‘s way. It’s hard for me to wrap my mind around how a weird feeling saved me from being in the middle of a deadly shooting,” she wrote on June 5 on her blog. She avoided being in the crossfire because of this instinct.

“My receipt shows my purchase was made at 6:20 pm. After that purchase I said I felt funny. It wasn’t the kind of funny you feel after spending money you know you shouldn’t have spent. …. The gunshots rung out at 6:23. Had I not gone outside, I would’ve been in the midst of gunfire,” the 24-year-old added.

Sadly, she was in the crossfire of this awful shooting — her brother, Jordan Ghawi, confirmed her death in a series of blog posts.

“At approximately 0215 CST, I received an hysterical, and almost unintelligible, phone call from my mother stating that my sister, Jessica Ghawi, had been shot while attending the midnight showing of The Dark Knight Rises in Denver, CO,” he wrote on his blog.

“I was able to contact the man that was with my sister, mutual friend Brent, who stated that they were in the theatre when an incendiary device was fired into the crowd and that shots rang out immediately afterwards.”

He later updated with more information about her death from Brent.

Jessica and Brent were seated in the middle portion of the theatre when a device was thrown into the theatre that produced a ‘hissing’ sound. The theatre than began to fill with smoke which is when patrons began to move from their seats. At that time, shots were fired. Brent and Jessica immediately dropped to a prone position for cover. Jessica advised multiple times for someone to call 911, which Brent immediately attempted to do.

Brent then heard Jessica scream and noticed that she was struck by a round in the leg. Brent, began holding pressure on the wound and attempted to calm Jessica. It was at this time that Brent took a round to his lower extremities. While still administering first aid, Brent noticed that Jessica was no longer screaming. He advised that he looked over to Jessica and saw what appeared to be an entry wound to her head. He further stated that Jessica presented with agonal respirations.

Brent then took what may have been his only chance to escape the line of fire and exited the structure where he then contacted my mother. Brent’s actions are nothing but heroic. The veracity of any other statements not issued by myself or Peter Burns should be questioned.

“Official cause of death is severe cranial cerebral trauma caused by a penetrating GSW to the head. Essentially, she died quickly and painlessly. Now we will begin the process of bringing her home to celebrate her life,” he later added.

Our thoughts are with the Ghawi’s, the victims and their families during this awful time.