Warner Bros. has pulled a trailer for the upcoming Ryan Gosling and Emma Stone film Gangster Squad. Why? The trailer shows a theater shooting scene that resembles what happened at the Aurora, Colorado theater shooting. 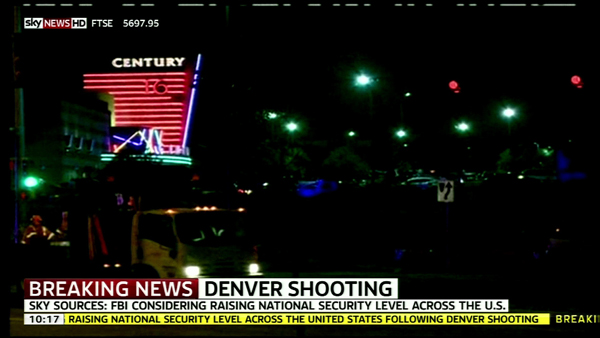 Warner Bros. — the studio behind The Dark Knight Rises  — has opted to pull the trailer for another film, Gangster Squad, from theaters in light of the tragic shooting at an Aurora, Colorado theater early Friday.

“A Warner Bros executive now tells me how the studio was scrambling to deal with the Aurora theater shooting crisis in the pre-dawn hours of the morning,” Nikki Finke of Deadline Hollywood wrote Friday. “Then, at 5 AM, one of the top distribution execs remembered that Warner Bros’ Gangster Squad trailer was playing ‘loose’ this weekend timed to the studio’s The Dark Knight Rises release.”

Theaters were instructed to start pulling the trailer early this morning. The reason: The film — starring Ryan Gosling, Sean Penn and Emma Stone — contains a scene showing a gangster opening fire on a theater with a machine gun.

It also appears that the trailer was pulled from Twitter and Apple’s trailer site — and YouTube has blocked the trailer from showing in the United States.

Warner Bros. has declined to comment on the trailer, but the studio did cancel the Paris premiere of The Dark Knight Rises and an all-day press conference after the news broke.

“We waited an hour and 45 minutes,” Sophie Grassin, a critic for Le Nouvel Observateur wrote of the cancelled press conference.

“Then, around 11:30 a.m., we saw Marion Cotillard arrive, made up, well dressed. The Warner folks led her into a room where they evidently told her the terrible news. The Warner team was in tears.”