Megan Abbott’s latest novel Dare Me is a provocative, disturbing look at teenagers and the difficult nature of love and loyalty. Readers will be shocked by Coach French and the inappropriate way in which she interacts with Addy, as well as Beth’s capacity for meanness and revenge. The honest, unflinching character portrayals and timely subject matter make this book a must-read. 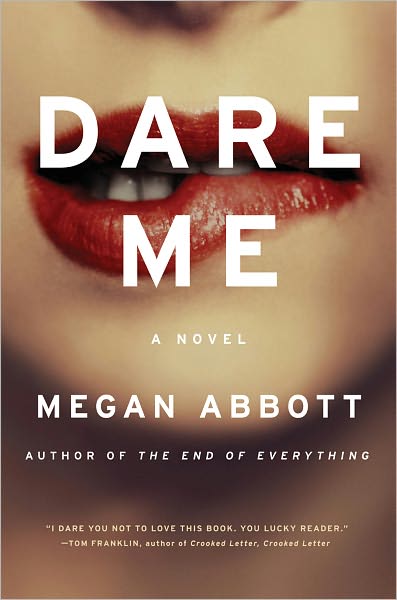 Beth and Addy are highschoolers who love being a part of the cheerleading squad. Beth is captain of the squad, and Addy, her lifelong best friend, is her first lieutenant. Together, they keep the rest of the cheerleaders in line while Beth plays the role of Queen Bee. Beth is talented and beautiful — the high school girl that all the others envy and want to be, and Addy feels lucky to be her closest friend. But when their cheerleading coach leaves, and a new one steps up to the plate, Beth and Addy are mystified by this new, young woman who deigns to lead their squad.

Coach Colette French presents a mystery to the girls on the squad. Since she’s a young mother with an absent husband, Addy and her fellow cheerleaders can relate to Coach French because she isn’t that far removed from them. Coach French invites the girls to her house and into her life, sharing with them the most intimate details. The girls are seduced by Coach French’s confidence and desire to trust them, and they are dazzled by her. Only Beth stands apart from Coach French — she believes she sees right through Colette and decides that she is going to regain her position as the top cheerleader, especially after Coach French takes away her status as team captain. Beth also doesn’t approve of how much time Addy spends with their coach and wants her back — after all, Addy was hers first.

As Beth wages a silent, manipulative war against Coach French, Addy is caught in the middle. She loves and trusts her coach and wants to protect her from Beth — after all, as Beth’s best friend, she is in a singular position to know what Beth is capable of and the depths she’ll go to in order to win, to reclaim what was hers. But Coach French underestimates Beth, believes that she can take her in just like she has with the rest of the girls. As their war escalates and Addy tries to prevent anyone from getting hurt, she must choose between her best friend and her coach before it’s too late.