Seth Rogen and his wife Lauren Miller faced a scary situation this week — a stranger jumped their fence and got comfortable in their front yard claiming voices inside his head directed him to Lauren. 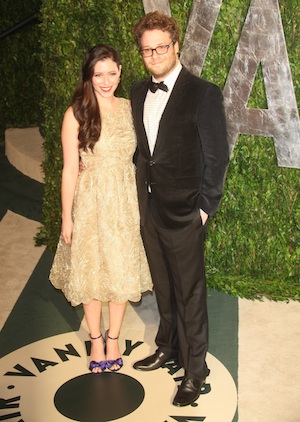 Seth Rogen has truly made it in Hollywood: He now has a stalker. The thirty-year-old actor — best known for his comedic roles in Knocked Up and Pineapple Express — and his wife are reportedly the target of Yasin Ajani who claims he is connected to Miller. Ajani trespassed onto Rogen’s property on July 16.

TMZ reports Seth Rogen’s wife, Lauren Miller, filed a restraining order against Ajani after he attempted to persuade their housekeeper to let him enter the home. He claimed he was delivering an item for Miller. When the housekeeper refused — she told police Ajani looked “unstable” — he then proceeded to jump their fence. And it gets creepier. The restraining order obtained by TMZ says Ajani then got cozy by their front yard, relaxing in their lounge chairs. Police were called to the Rogen home and Ajani was arrested on the scene. A judge ruled today Ajani must stay at least 200 yards away from Seth Rogen and Lauren Miller. In addition, TMZ says Ajani is currently undergoing a 72-hour mental health evaluation.