Angelina Jolie has no love for her kinda mother-in-law after Brad Pitt’s mom stepped over the line one too many times. What happened? 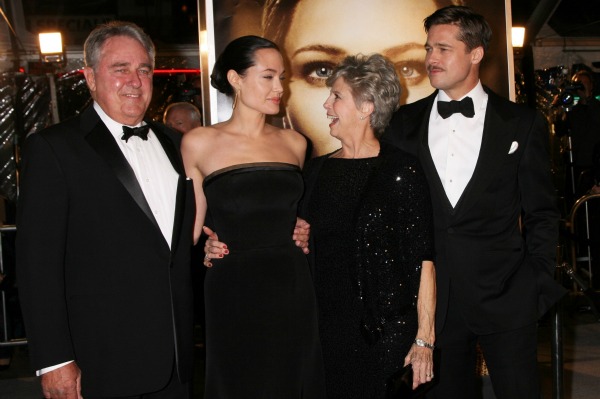 Celebrities are just like us. They too have mother-in-law drama! Angelina Jolie is reportedly at war with her sort-of mother-in-law after Brad Pitt‘s mom completely disregarded little Shiloh’s tomboyish sense of style in favor of more girly fare.

“It’s well-documented that Shiloh likes to dress like a boy,” a source told the Evening Standard. “But Jane still insists on buying her fairy costumes and princess dresses, which Angelina finds very disrespectful.”

This isn’t the first time Angelina has clashed with Jane Pitt. It’s well-known that Jane and Jennifer Aniston were super-tight, which is said to have always put Angelina on the defensive. Plus, Jane’s extremely conservative politics clash with Angelina’s live-and-let-live liberal attitude.

In fact, Jane recently penned a letter condemning Barack Obama for his pro-choice, pro-gay marriage ideologies — a move that raised the ire of Angelina.

“[Angelina] has told Brad he must educate his mother, but Brad is too much of a mama’s boy,” a source told Perez Hilton. “If Brad won’t do it, Angelina will have to take matters into her own hands and talk to Jane about how, as the mother of such a prominent celebrity, she shouldn’t be writing letters that clash with her son’s personal opinions. It’ll inevitably end up in a huge blowout, with Brad stuck in the middle. Brad keeps telling her not to take this so seriously, but when Angie sets her mind on something, there’s no talking her out of it.”

They’d better get over their beef fast. Rumor has it that Brad and Angelina may wed in New Orleans this weekend and Jane already has their wedding gift: A bible.

“It was a special wedding gift,” Mardel Christian & Education salesman Kris Burnett told InTouch. “We prayed with Brad’s mom and sister over the Bible, asking the Lord to lead the way in Brad and Angelina’s life.”

We’re sure Angelina will love it.