Zooey Deschanel’s 2012 Emmy nomination makes her, quite fittingly, one of the new girls on the honored block. The actress and singer gushes over her dream come true! 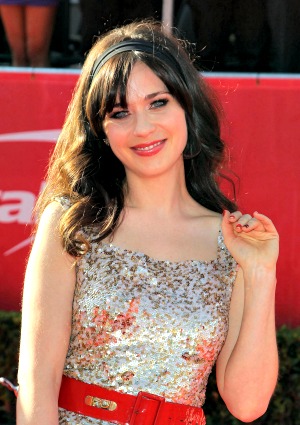 Zooey Deschanel is officially an Emmy-nominated star! It’s fair to say the New Girl actress is overjoyed by the Outstanding Lead Actress in a Comedy Series honor, happily recalling just how long she’s dreamed of hearing her name called out.

“I wanted to be an actress since I was 2 years old,” Zooey Deschanel told Entertainment Weekly on Thursday in reaction to her 2012 Emmy nomination for her role as Jess on Fox’s New Girl. “It’s always been my dream and ambition.”

The 32-year-old, who was awoken early by phone calls and texts filled with congratulatory wishes, when on to gush, “This is the kind of moment you dream about. Never in my wildest dreams would I have imagined that I could have this incredible honor and recognition. It’s just so exciting.”

“I have such a great job that’s just such an incredible gift, and I always want to be doing the work because I love the work and not for some other reason. [But] it just means so much to have this nomination.”

Zooey Deschanel will be in fine company to celebrate the honor, as fellow New Girl star Max Greenfield also was given a nomination in the Supporting Actor category. “We’re a pretty fun set, so there will be celebrating,” she said.

In reaction news of his nomination, Max Greenfield gushed in awe, “I walked into hair and makeup this morning and Paul Rudd, who’s the star of the movie, turns to me and goes, ‘Hey man, congratulations on being nominated for an Emmy.’ What the f— is going on with my life? Two years ago I was auditioning for Zeke and Luther, and now I’m walking to hair and makeup and Paul Rudd is congratulating me on my Emmy nomination. I don’t know what’s happening.”

Congratulations to Zooey Deschanel, Max Greenfield and the New Girl crew as a whole!