Mayim Bialik is thrilled to have been nominated for a 2012 Emmy Award for her role on The Big Bang Theory — but how can she explain such an honor to her two sons who’ve never watched TV? 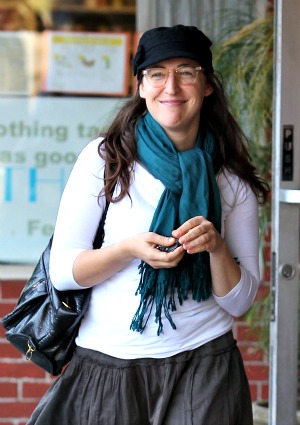 Mayim Bialik’s 2012 Emmy-nomination news arrived just as the actress, also known for being an attachment parenting advocate, was giving an interview on world breastfeeding month. Since that moment her phone hasn’t stopped ringing!

Between taking calls offering congratulations, Mayim Bialik’s two children piped up to inquire what the hullabaloo was all about.

Mayim Bialik on nursing her toddler >>

When asked if her sons know what’s happening while speaking to Entertainment Weekly, she explained Thursday, “No, our older son is almost seven, and he’s starting to understand.”

“They don’t watch TV, so he asked [this morning] what was going on, why we were freaking out, and I said, ‘Remember when President Obama wanted to be president? He had to be nominated.’ I said, ‘Well, I got nominated for something.'”

Plans to celebrate the honor, of course, remain true to the 36-year-old’s family and health-centered nature. Mayim Bialik shared, “We’re taking our boys to Legoland here in Atlanta and my best friend said she would buy me two vegan cupcakes today!”

This chance to party hardy came as a total surprise to the actress fans knew decades ago as Blossom, who admits that after taking time away from Hollywood to complete her PhD she didn’t expect her career to take off again.

“When I went back to acting after I got my PhD [in neuroscience] and just had my second son, I just thought, hopefully I’ll work enough here and there to get health insurance,” Mayim Bialik admitted — adding that her role as a neuroscientist on The Big Bang Theory was something she’s never even imagined as a possibility.

“It was never on my radar that I would A.) Be working on a show anyone had heard of and B.) Be made a regular, and again, this is completely ridiculous, in the best way.”

Congratulations to Mayim Bialik and fellow stars on their Emmy nominations!